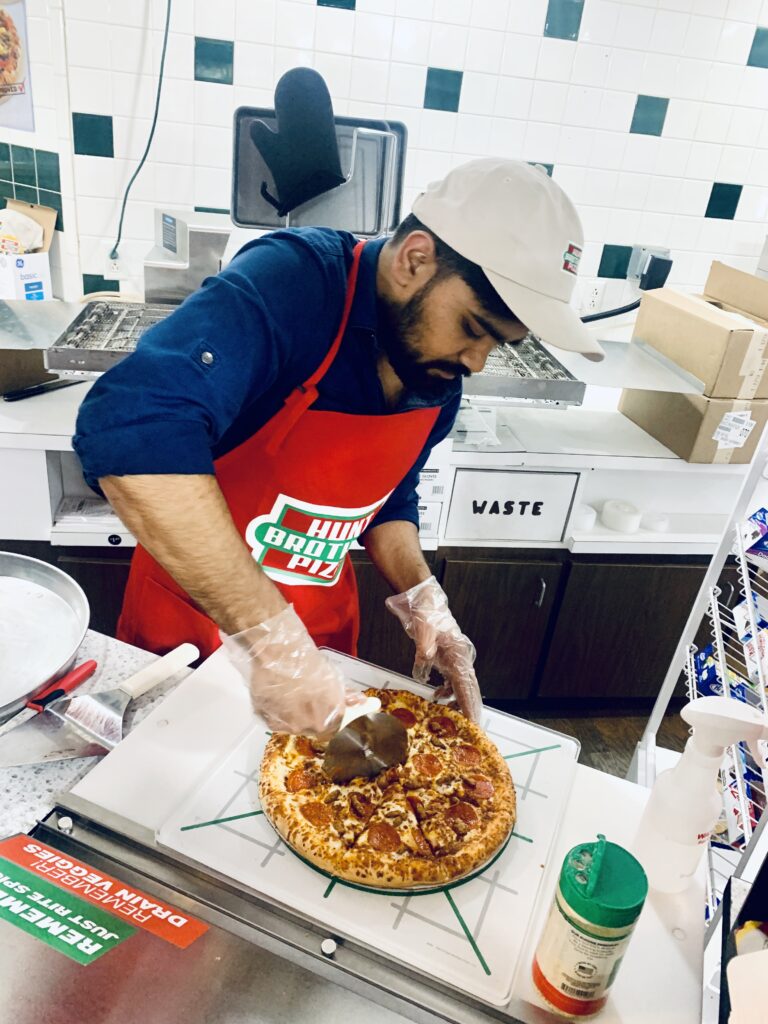 Lewisburg is the home of pizza aficionados. With a population of less than 4,000, the town holds strong on pizza places and supports 9 in total including Hill and Holler Pizza, Blackwell’s Catering, The Humble Tomato just in downtown. There’s also Bellacino’s, Alfredo’s, Papa Johns, Godfather’s Pizza, and Little Caesar’s. But did you know about Hunt Brothers Pizza? If you regularly pop into gas stations and convenience stores, you’ve seen this chain at several stops along the way.

“The Amazing Way Hunt Brothers Has Built a Pizza Empire…”

The Shell Gas Station across from Walmart on Rt 219 in Lewisburg is leased by Prince Bhatt and his cousin. They just recently started offering Hunt Brothers and are loving the positive response. In March 2015, Inc. shared a story “The Amazing Way Hunt Brothers Has Built a Pizza Empire. Many locations are in the South. They’re rural. And they serve ‘hunks of pizza out of gas stations.’” The article states that this chain is quietly winning over the rural south by slipping into places where big-name pizza chains probably couldn’t survive. 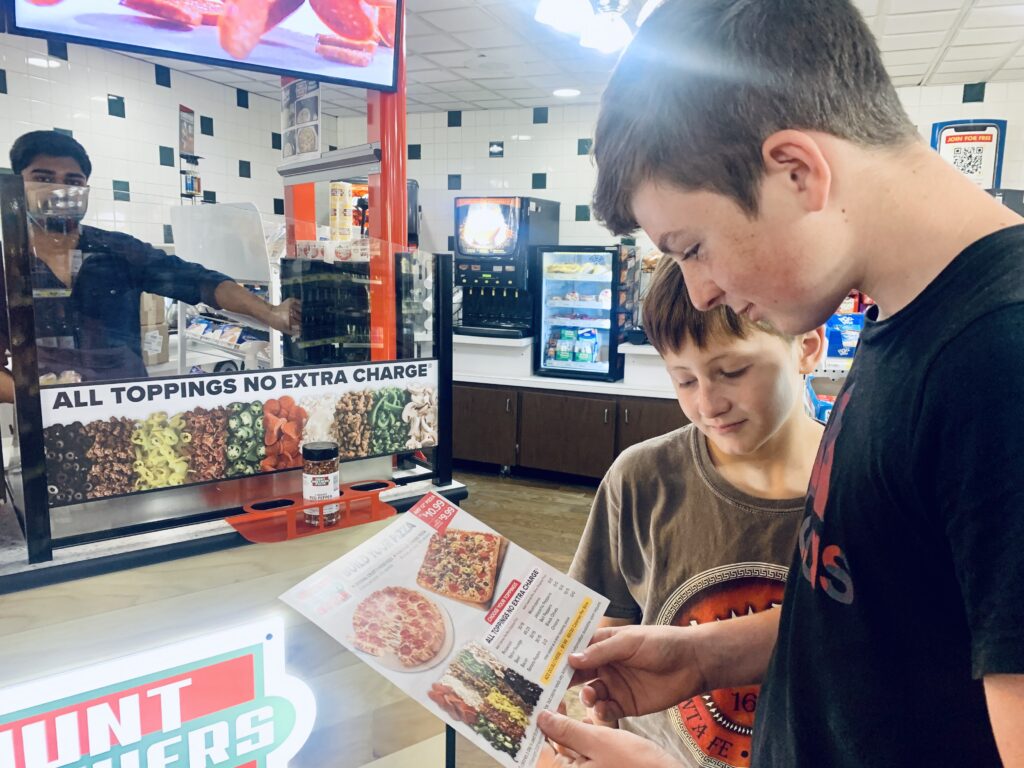 There are 7,300 locations across the United States…

In total, there are 7,300 locations across the United States including army bases and arenas. This mini pizza stop was originally founded in 1991 by four brothers who wanted to offer an expedient option for a quick bite when traveling. Prince tells us it’s nice to be able to able to offer Hunt Brothers for customers looking for a quick pizza fix.

FUN FACT: According to PMQ Pizza Magazine, breakfast pizza was the fastest-growing item of the second half of 2010

You can order “build your own” which includes all the toppings. Since you don’t have to pay for the toppings, get as many as you want! There’s pepperoni, Italian sausage, beef, bacon, banana peppers, mushrooms, jalapeno peppers, black olives, etc. You can also go with the limited-time special Chicken Bacon Ranch Pizza. Or start your day like a champ with a Breakfast Pizza, which is topped with scrambled eggs, bacon, breakfast sausage, mozzarella, and cheddar. FUN FACT: According to PMQ Pizza Magazine, breakfast pizza was the fastest-growing item of the second half of 2010, outpacing scrambled eggs and bagels! (pmq.com/breakfast-pizza-of-champions.) 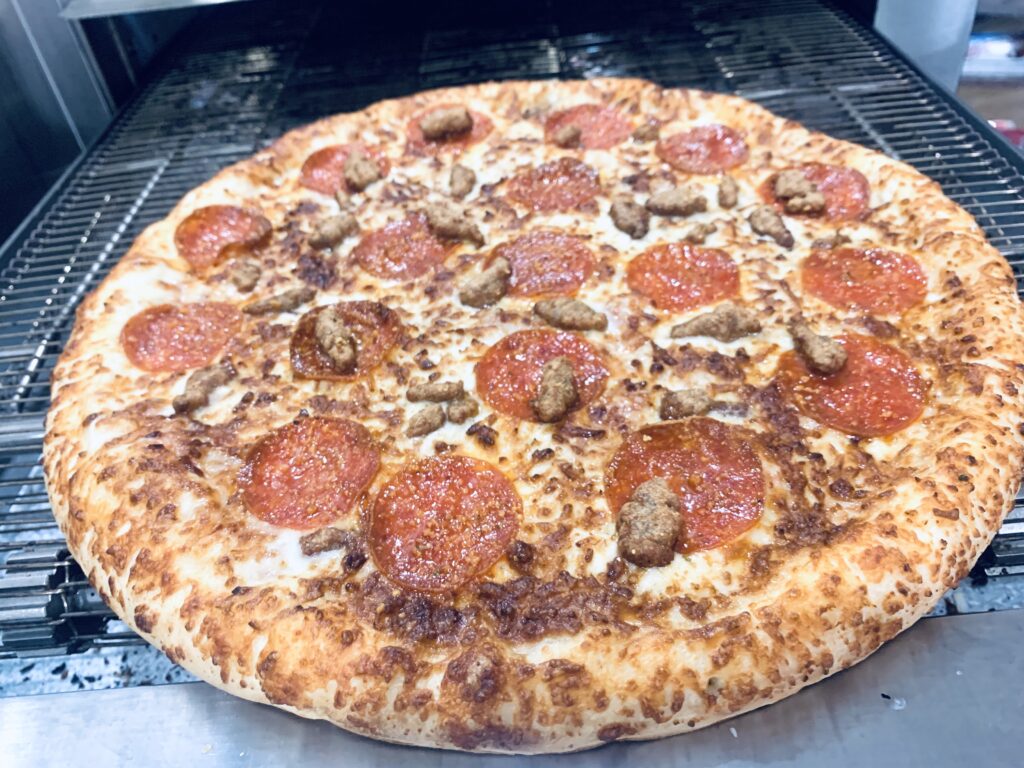 Hunt Brothers prices are the same at every location.

Hunt Brothers prices are the same at every location. A 12” pizza is $10.99 and if you’re not willing to make that kind of investment in your initial trial run, order a “Hunk of Pizza” which is described as ¼ of a whole pizza and it’s $2.99. These slices are premade and sit in the warmer. You can order your pizza with original crust at 8 slices or as thin crust with 16 slices.

So never fear, pizza night is always here. Prince at the Shell across from Walmart would also like to share that he offers local pepperoni rolls from a bakery in Clarksburg, a large variety of cold beers and a nice selection of wines including Kirkwood Wines from Summersville.