Pinkney’s legacy group is hailed as “The best act of its genre on the music scene today.”

Pinkney’s legacy group is hailed as “The best act of its genre on the music scene today,” engaging in compliance with all States’ Truth in Music Laws, and via a registered United States Patent and Trademark Office Federal Service Mark for the name Bill Pinkney’s Original Drifters®, expanded through litigation to include “The Original Drifters” and “The Drifters.” 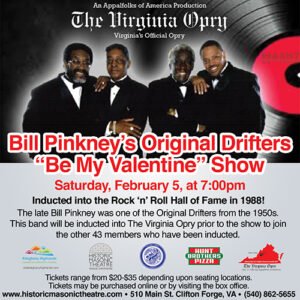 The famous group was inducted into the Rock ‘n’ Roll Hall of Fame in 1988 and continues to tour the nation despite COVID-19 that forced AAA to postpone the August 2020 show that had been scheduled at the Masonic Theatre.  In March of that year, former Virginia Governor Ralph Northam signed “Senate Bill 283” to designate The Virginia Opry as the Commonwealth of Virginia’s Official Opry, but, due to the COVID-19 pandemic, the Bill Pinkney’s Original Drifters® induction and performance was postponed.

The internationally famous doo-wop and R&B group The Drifters was co-founded by Bill Pinkney in 1953.

The internationally famous doo-wop and R&B group The Drifters was co-founded by Bill Pinkney in 1953. Thirty-five years later, original members Pinkney, organizer Clyde McPatter, Gerhart Thrasher, and four later Drifters were inducted into the Rock and Roll Hall of Fame, which filmed PINKNEY’s oral history in 2001 for its Legends Series. 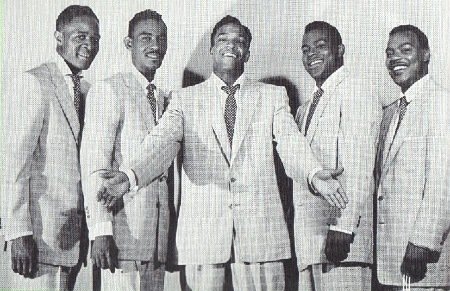 The “Be My Valentine” Show at The Virginia Opry will feature the famous quartet performing such favorites as “Money Honey,” “This Magic Moment,” “Please Stay,” “Dance with Me,” “There Goes My Baby,” “Under the Boardwalk,” “Up on the Roof,” and “Stand by Me.”

Alfred “Mustard” Dearing, Sr. will also be inducted as a member of The Virginia Opry and serve as emcee.

Tickets may be purchased at historicmasonictheatre.com

Sponsors for the show include Hunt Brothers Pizza and 103.5 Big Country, the Radio Home of The Virginia Opry.

Tickets may be purchased at historicmasonictheatre.com or by visiting the box office at 510 Main Street or by calling (540) 862-5655.  Prices depending upon seating locations range from $20 to $35 per ticket.