The Virginia Opry is now in its 30th year! In 2020, they were designated as Virginia’s Official Opry!

Hoover was born in Washington, DC and can remember learning Elvis songs and mimicking his styles as early as the second grade. He grew up in Rockville, Maryland, and graduated from Wheaton High School where he sang and put together a small band to play teen clubs and proms. Michael saw Elvis three times in concert, has all of his records, and has seen all of his movies. “Everyone has a hero – he was my hero and I wanted to be like him,” Hoover said. 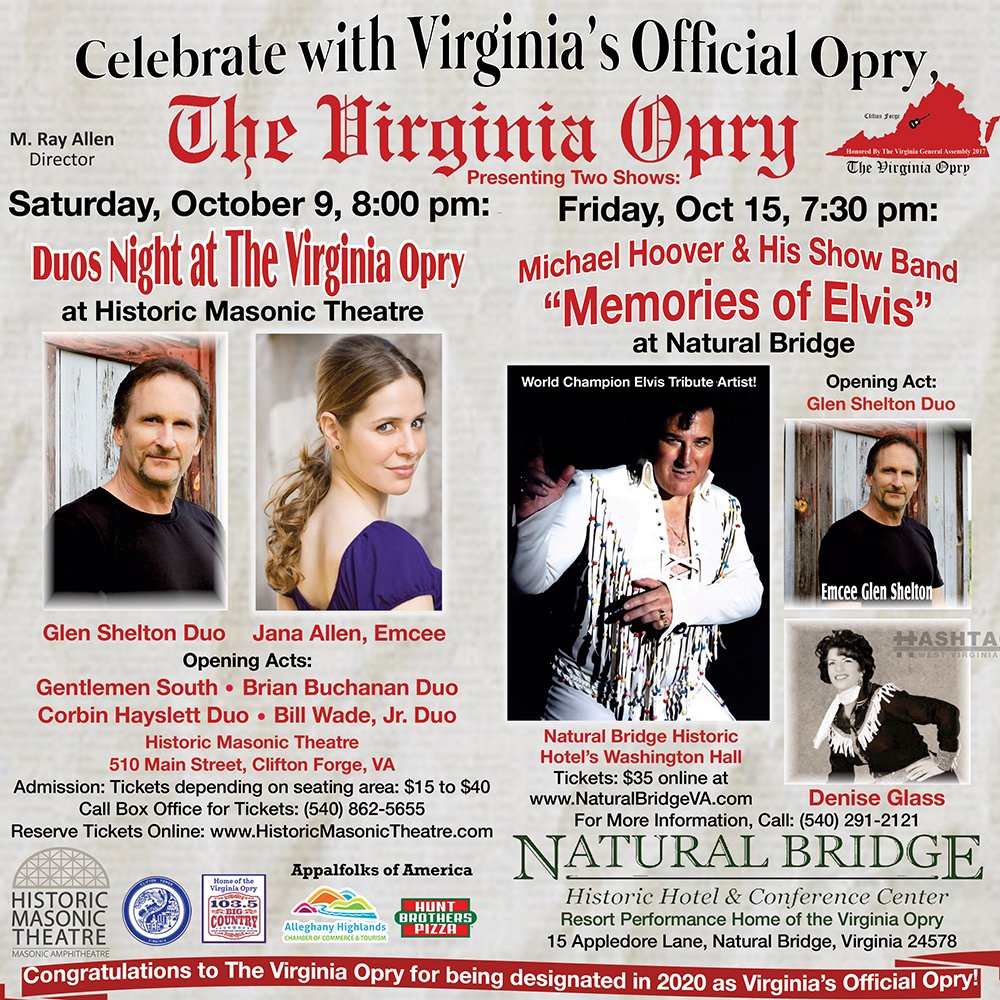 “There will never be another Elvis, and I would just like to bring back a few memories of the late King.” – Hoover

After the untimely death of Elvis Presley in 1977, Michael was inspired to do his “Memories of Elvis” Show as a tribute to the King of Rock and Roll. Hoover says, “There will never be another Elvis, and I would just like to bring back a few memories of the late King.” He has been performing for over 30 years and has developed into one of the finest male vocalists in the country. The similarity between Elvis and Michael in voice, mannerisms, and looks is astounding. Experiencing Michael’s “Memories of Elvis” show is the next best thing to seeing Elvis in concert.

His powerful and dynamic voice enables him to captivate his audience, both young and old alike. Due to his God-given talent, Hoover is comfortable singing rock and roll, country, rhythm and blues, or gospel music. His outstanding musical training included study with one of the most renowned voice teachers of our time, the late Frederick Wilkerson. Mr. Wilkerson coached Roberta Flack, Ethel Waters, and many other well-known artists.

Out of a total of close to 100 singers, Hoover was proclaimed to be the best Elvis tribute artist in the world.

He has won various Elvis look-alike and sing-alike contests and won the area’s Best Country Singer award from the year-long Country Showcase American Jamboree in 1979. In 1985, he won second place in the area’s Star Search contest in Maryland. In commemoration of the eleventh anniversary of Elvis’ passing, a singing contest was held in Memphis, Tennessee on August, 19, 1988. Some of the world’s best talent turned out for this event. Out of a total of close to 100 singers, he was proclaimed to be the best Elvis tribute artist in the world.

Hoover has performed and has been interviewed many times on radio and television stations all over the country. Numerous articles have been written about him and featured in many prominent newspapers. He is surely becoming recognized as one of the country’s finest performers.

Glass began performing as a vocalist in her father’s band as a teenager, and her love for Patsy Cline has led her to perform “A Tribute to Patsy Cline” at such venues as the Lee Theatre in Pennington Gap, Virginia.  She also tours with Michael Hoover as a vocalist. 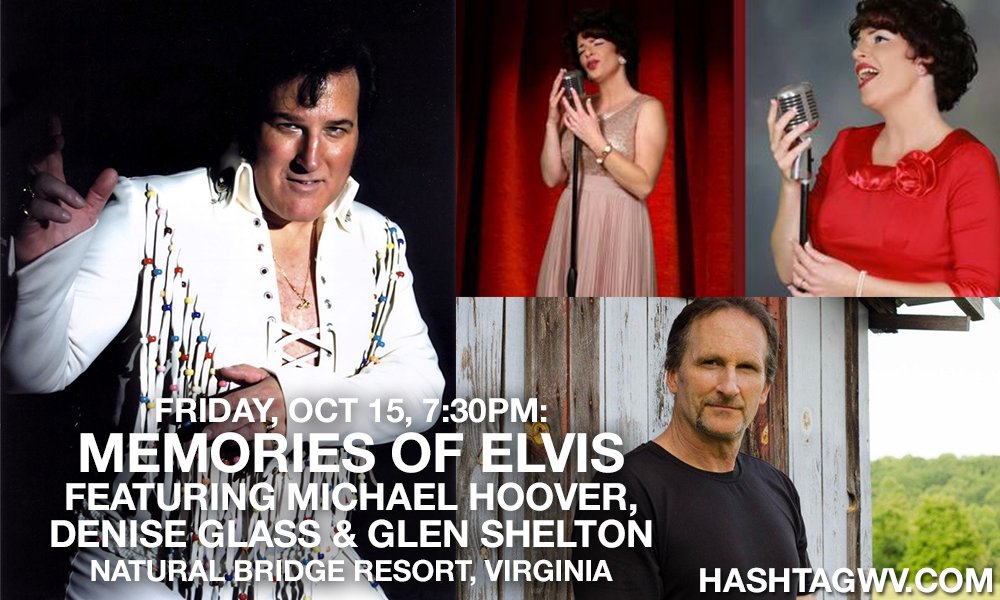 Shelton is a musician you sure don’t want to miss! He has written, recorded, and released songs to National radio that charted on Country and Christian Country charts (including two #2 songs). He has shared the stage with more than 40 National Acts including Joe Nichols, Sawyer Brown, Tanya Tucker, Randy Travis, Lonestar, Darryl Worley, Rhonda Vincent, Ronnie McDowell, Lee Ann Womack, and Jimmy Fortune.

He also performed at hundreds of events/venues (Fairs, Festivals, Parks, Theaters, Churches). He offers solo, duo, and full band concerts. Whether singing at a county fair or a church, he sings some favorite cover songs as well as his own music. He also includes a tribute to the Veterans in his outdoor and theater shows. Glen’s concerts are more than music and he makes everyone feel welcome!

For tickets, visit NaturalBridgeVA.com and for more information, call (540) 291-2121. Natural Bridge Historic Hotel and Conference Center is the resort home of the Virginia Opry. They are located at 15 Appledore Lane, Natural Bridge, Virginia 24578.

The Virginia Opry is now in its 30th year! In 2020 they were designated as Virginia’s Official Opry!

More information about the Virginia Opry:

In 1973, M. Ray Allen married Cherie Suzanne Davis, Miss Virginia of 1968, received his MFA degree in theater arts from UCLA in 1980, founded Appalfolks of America Association (AAA) in 1985 with Cherie serving as Chairman of the Board, and spearheaded the founding of The Virginia Opry in 1992 by recruiting H. Ray Tucker, guitarist, vocalist and songwriter, as the director of The Virginia Opry that made its debut in the Historic Stonewall Theatre (renamed the Historic Masonic Theatre in 2003) during the Fall Foliage Festival.

Nationally prominent groups such as The Freight Hoppers, noted for appearances on Garrison Keillor’s “Prairie Home Companion,” have graced the stage as guests on The Virginia Opry along with outstanding Nashville recording artists, the late Dan Seals and Keith Bryant. Other outstanding guests include The Lonesome River Band, The Farm Hands, The Darrell Webb Band, Michael Hoover and his Show Band, Robby Meadows and Pony Express, and the late Bob Campbell, one of only six vocalists who performed as one of The Statler Brothers, having replaced Lew DeWitt during three tours with The Statler Brothers who opened for Johnny Cash, including a show at Soldier Field in Chicago attended by 55,000.