Friday, July 16: Steal Your Peach Under the Stars at Glen Haven Farm! 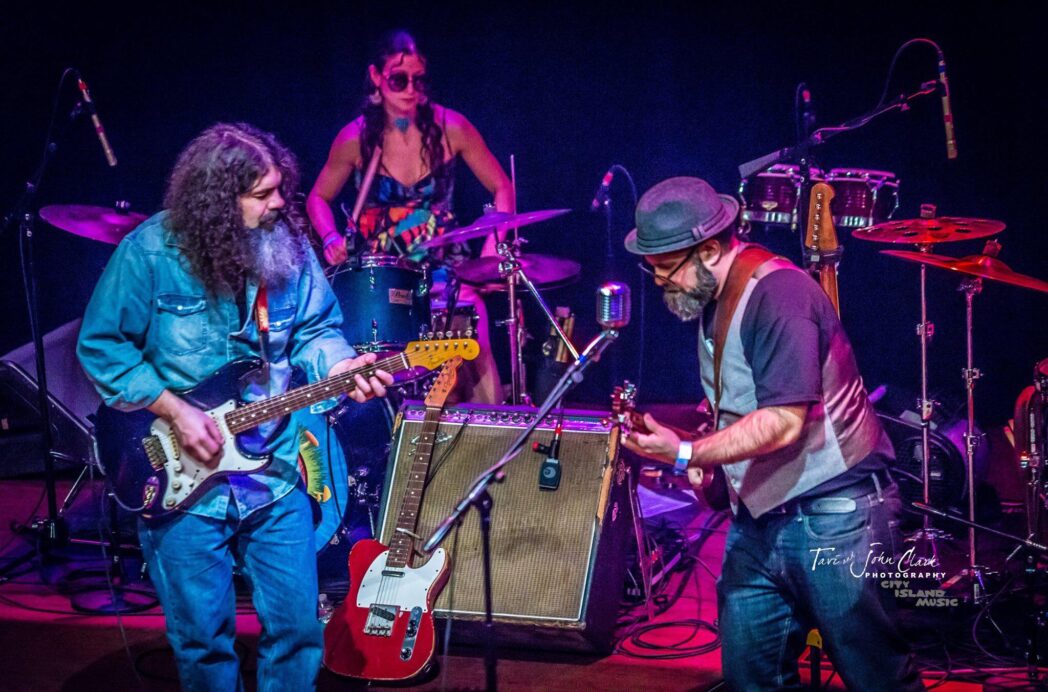 On Friday, July 16th, The Farm at Glen Haven in Clifton Forge invites you to join them for a 4:20 vibed power show under the stars with Grateful Dead and Allman Brothers mashup, Steal Your Peach! Local favorite, Chad Nickell and The Loose Change will open the show at 8p. There will also be plentiful food, an excellent variety of brews, and artists and tie-dye vendors selling their handmade goods! Tickets are just $25 in advance. Gates open at 6p. BONUS: This is an all-ages event. 12 and under are FREE! 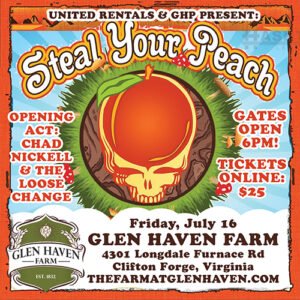 Playing together since early 2015, Steal Your Peach can be described as a mixture of some of the hardest working musicians in the Philadelphia area. Each bandmember has multiple projects currently both original and not, and have formed a bond with some of their favorite and most influential music, paying close attention to detail of all of the original music. You will see that they also add their own improvisations to the mix making each show unique and exciting, and to create a very tangible symbiotic experience between the band and the listeners.

They say, “There is nothing like coming back to pay homage to the music that inspired us all to play. They have played Brooklyn Bowl, Trocadero Theater, Ardmore Music Hall, Underground Arts, Abbey Bar at Appalachian Brewing Company, River Street Jazz Cafe, Stout’s Brewery, The 8×10, Gypsy Sally’s, The Acoustic, Mexicali Live, Havana New Hope, Tellus360, World Cafe Live Philadelphia and at The Queen in Wilmington, De, Be On Key Psychedelic Ripple (Denver, CO), Owsley’s Golden Road (Boulder, Co), Quixote’s True Blue (Denver, Co), In and Out of the Garden We Go Festival, WhoHill Festival, Bright Box Theater, The Abraham Lincoln Hotel.

They have previously played on the farm and tell us they are thrilled to come back! 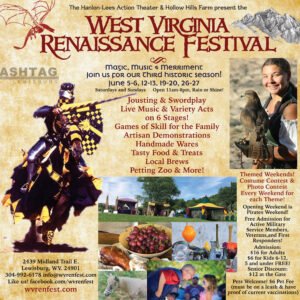 They have previously played on the farm and tell us they are thrilled to come back! Their last show was in May, 2018. Reminiscing on the night, they say, “it was a warm crowd, hosted by amazing music lovers in a beautiful setting. There was nothing to take from it but pure joy and positivity!”  They go onto say that their favorite part about visiting the Allegheny Mountains is the active atmosphere, from the people to the trails to the rivers and valleys. “It has everything to offer and more.”

Prepare for some unexpected curveballs at this year’s show!

Prepare for some unexpected curveballs at this year’s show! They tell us they will be taking the music into different directions and it will be “one hell of a joyous ride for true lovers of both of the two greatest American Rock n’ Roll bands that ever existed.” They say, “we feel blessed to have the opportunity to do our best to pay homage to our favorite bands for you” 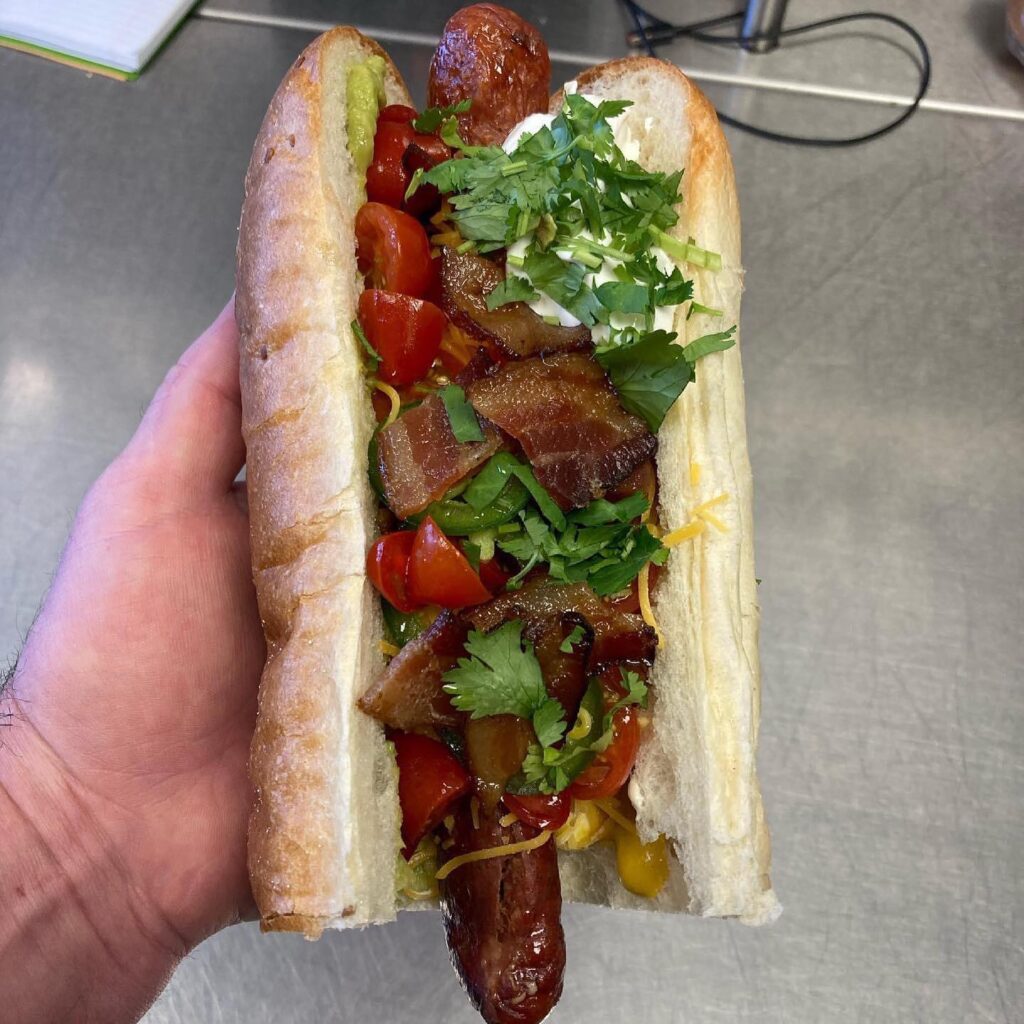 During the show, don’t be surprised if you and everyone else are talking about the burritos and hot dogs from Lexington based food truck, LexMex Tacos. Owner Collin Donnelly tells us, “I am pushing toward our big ole chipotle chicken burrito; a Sonoran style hot dog loaded with pico de gallo, guacamole, pickled onions, and other goodies; and definitely our vegetarian street style corn taco w/ mexi-mayo, sweet potatoes, and cotija cheese; and maybe even frozen lemonade!” Find them @lexmextacos on facebook.

There will also be bounteous brews from Devils Backbone Brewing Company which are award-winning European-style lagers dbbrewingcompany.com. Blue Mountain Brewery’s high-quality pre-prohibition lagers, cold-aged German ales, Orange Infused IPAs, Pale Ales, and more. bluemountainbrewery.com. Richmond/Waynesboro-based Basic City Beer Co. microscopic brewery’s brews that are all about the intoxicating lure of the American dream. They say their techniques and traditions of zymurgy synergize into creative and contemporary craft beer. We are hoping their limited release Citra Citra Lingus Lingus Dipa will be available at this show! basiccitybeer.com. You’ll also have the choice of Bold Rock Cider from Nellysford. They offer award-winning ciders and their line has blossomed to include Hard Teas, Hard Lemonades, Hard Seltzers, and even ready-to-drink Craft Cocktails. boldrock.com.

Covington-based band, Chad Nickell & The Loose Change, is the opening act. Formed in May 2015, they focus on writing captivating original music. They say their journey has no boundaries. “Sometimes it’s Blues, others it’s Alt-Country/Americana with a dabble of Soul. We simply play what we feel.” Follow them for show dates and live streaming on facebook @chadnickellandtheloosechange 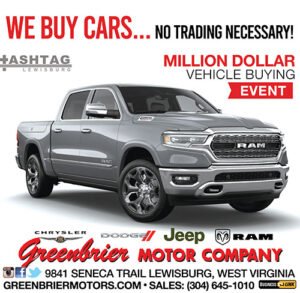 “Do more of what makes you happy” and enjoy a night under the stars with great company, food, and brews.  Don’t forget to bring a blanket, or a lawn chair and kickback. Event organizers have missed live music too, and cannot wait to jam out with you this July! The Farm at Glen Haven is located just 6.2 miles (10-minute drive) outside downtown Clifton Forge at 4301 Longdale Furnace Road. To purchase tickets, visit thefarmatglenhaven.com or call 434-962-5822. See you there!