Off the Beaten Path: Calendar Craziness 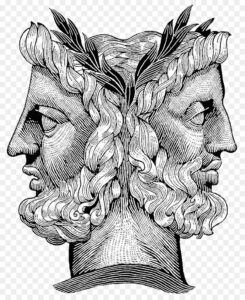 Janus am I; oldest of potentates;
Forward I look, and backward, and below
I count, as god of avenues and gates,
The years that through my portals come and go.

With the coming of January, we have opened the door to a new year.

With the coming of January, we have opened the door to a new year. May the spirit of the opening be with you on your journey into 2021. Why say such a strange thing, you ask? Well, that’s because January is named after Janus, the ancient Roman god of gates and doorways, and of beginnings and transitions. Often called the two-faced god, he had two countenances, one gazing forward into the future, and one gazing backward into the past. His festival occurred
during the dead of winter, and so we find ourselves over two thousand years later living in a month bearing his moniker. Weird, huh? And if you think this is the only strange thing about our modern calendar, all I’ve got to say is, hold onto your seat!

One strange occurrence crops up at the complete opposite end of the calendar.

One strange occurrence crops up at the complete opposite end of the calendar. You know those months with strange names like September, October, November, and December? Well, the weird thing is that sept, oct, nov, and dec are prefixes meaning seven, eight, nine, and ten, respectively. So what we have here are names meaning seventh month, eighth month, ninth month, and tenth month, which of course those months most certainly are NOT! What in Sam
Hill is going on here? Well, it turns out that way back in Roman times the year consisted of only ten months, with a combined total of 304 days. The year began on March 1st, so, if you count forward, you’ll see why those months at the end of the year are labeled the seventh through the tenth months. 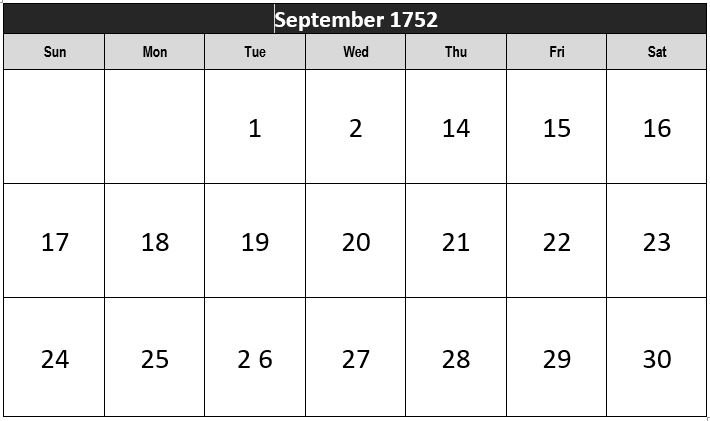 The Romans apparently didn’t care much for that time of year and just basically said, “Eh,” and ignored it completely, leaving that period of time with no name at all! It wasn’t until around 700 BC…

But what about January and February, you ask? Well, as crazy as it seems, the Romans apparently didn’t care much for that time of year and just basically said, “Eh,” and ignored it completely, leaving that period of time with no name at all! It wasn’t until around 700 BC that the months January and February were added to the calendar by the legendary second King of Rome, Numa Pompilius. But the problem with Rome’s calendar was that, while the Earth takes a very specific amount of time to orbit the sun (365.24219 days), the Roman calendar was anything BUT specific, with things being changed willy-nilly as it were, without any real thought as to their consequences, and this led to the calendar year getting out of whack with the seasons and the actual solar year. Various ideas were tried to get things back in order, including the insertion of an extra month, called Intercalaris, at the end of February. This was supposed to occur every two or three years, but the honor of deciding when and if this extra month was to be added was given over to the pontifex maximus, who was the chief high priest and also many times a politician. And so, just like many politicians of our own day, they often used their power to their own advantage, in this case by manipulating the calendar to allow their political
allies to stay in office longer, or to force their foes out early. But of course! Who would expect anything less of them?

As you can well imagine, all of this led to disastrous results…

As you can well imagine, all of this led to disastrous results, with the calendar becoming so out of kilter that the winter and summer months wandered completely away from their associated seasons, according to one ancient writer, Macrobius. Needless to say, this became a major problem for Roman administrators. It took someone bold and strong to come along and say enough is enough, and that person was Julius Caesar. Creating a sort of calendar Manhattan
Project, Caesar employed a group of Greek astronomers and mathematicians to design a new calendar, which he revealed to the world in 46 BC. This calendar, called the Julian calendar, would come to be used by the Roman world and most of Europe for the next 1,600 years.

Indeed, it’s still in use today by the Eastern Orthodox Church. In this new calendar, Caesar abandoned the ill-defined Intercalaris month, opting instead to have just one extra leap day inserted at the end of February every four years, which is how our modern leap days came to occur in February. The lengths of various months were also changed including January, which went from having 29 days to 31 days. The average year now consisted of precisely 365.25 days and some semblance of order was returned to the calendar. Everyone was happy.

The problem was with the number I mentioned earlier…

Everything seemed fine and dandy, but once again there was trouble lurking just around the corner. The problem was with the number I mentioned earlier – a year is actually 365.24219 days long, not 365.25 days long. Now, this might not seem like much of a difference, but, given enough time, something bad was bound to happen. And so it did. By the year 1582, those tiny little decimal point differences had racked up to almost 13 days. The calendar was once again
getting out of whack with the seasons.

But what was to be done? Well, once again a sort of ancient Manhattan Project was instituted with the goal of coming up with an even more precise calendar to replace the Julian one, only this time it was Pope Gregory Xlll who came to the rescue. He set up a calendar commission that tackled the problem for a full five years, and in the year of our Lord 1582 his new calendar, called aptly enough the Gregorian calendar, was introduced to the world. The decided upon a remedy to get everything back in order was to move the time of Easter celebration back to when it had been in the year 325 AD (when the First Council of Nicaea occurred) by removing ten days from the calendar. Thus, overnight, Europe went from Thursday, October 4, 1582 to Friday, October 15, 1582. Talk about jet lag!

The Gregorian calendar also switched things up a bit by converting any centurial year that is evenly divisible by 400 into a leap year. Thus, 1700, 1800, and 1900 were not leap years, but 1600 and 2000 were. Now the average year contained 365.2425 days. Close but not perfect. Another change came in moving New Year’s Day back to January 1st. It had been moved from March 1st to January 1st back in 153 BC to align with the inauguration of elected officials in Rome, but during the middle ages the Catholic Church had persuaded many western European countries to move New Year’s Day up to March 25, which was the date of the Feast of the Annunciation. The new Gregorian calendar moved it back once again.
Gregory had no trouble getting the Catholic states of Spain, Portugal, and Italy to switch to his new calendar immediately, but protestant Europe was a bit more hesitant, fearing that the move was part of some cunning plan by the Roman Catholic Church to reassert its authority over them. Nevertheless, in time they too were convinced. In 1750 Britain enacted the Calendar (New Style) Act 1750, which officially brought the country into the Gregorian calendar fold. But,
in a final act of defiance and just to snub Pope Gregory, they used new calculations to arrive at the same calendar result without ever mentioning his name. In 1752 the new calendar was finally rolled out in Britain and its North American colonies. Over time more errors had added up and it was now necessary to eliminate 11 days from the calendar. And so it was that when clocks chimed midnight over the British Empire, Wednesday, September 2, 1752 instantly became Thursday, September 14, 1752.

And that, my friend, brings us to the current day.

And that, my friend, brings us to the current day. You might think that all is surely in order now. Everything is ticking along just fine, and our calendar is in perfect harmony with the cosmos. Right? Well, hold your horses. The Gregorian calendar is still making the average year about 0.00031 seconds too long. That means by the year 4800 we’re going to be off by another day.

You’d better put that in your calendar. In the meantime, watch where you tread, and maybe, just
maybe, you might sometimes want to go OFF THE BEATEN PATH.