Eye on the Sky: The Hunter of the Heavens 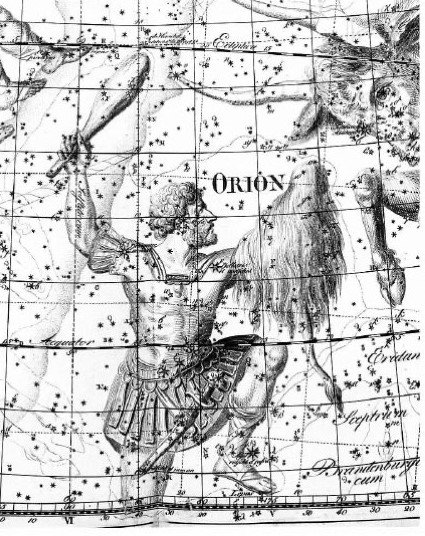 Many times, when I’m ambling about outside at night, I like to stop and look up at the stars.

Many times, when I’m ambling about outside at night, I like to stop and look up at the stars. I view them
as old friends. Wherever I go, I can look up and there they are, in the same familiar patterns. Some are
there throughout the year, while others come and go with the seasons. I can look forward to their
arrival and say farewell to them on their passing, knowing they will come again and never let me down.
Now, with the arrival of winter and its cold, frosty nights, one old friend has started making his
reappearance in the night sky. Rising up out of the darkling gloom of the eastern forests, Orion the
Hunter has resumed his nightly march across the heavens, with his shield held out to the ready and his
arm raised high with club in hand, ready to vanquish all enemies. 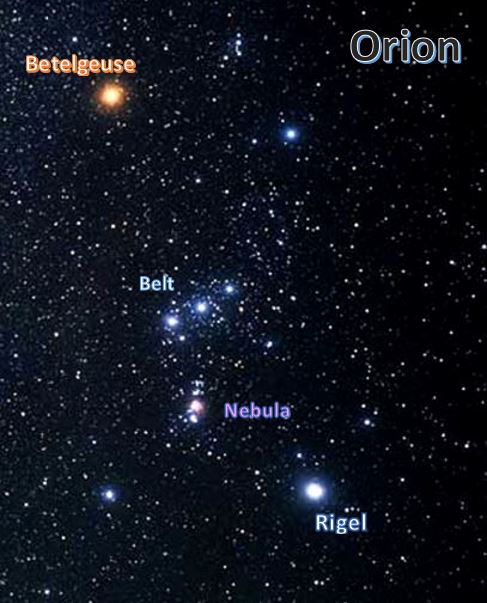 It is my sincerest wish that Orion becomes your lifelong friend as well.

It is my sincerest wish that Orion becomes your lifelong friend as well. I think this can easily be achieved for two reasons: first, the constellation of Orion is VERY easy to locate, and second, once you’ve seen it, you’ll never be able to UNsee it! To locate it, simply go outside around 8:00 pm on a clear night this month and look to the eastern sky. I’ve even provided a picture, so you’ll know what to look for. What you’ll see is the hunter charging across the sky facing rightward. As mentioned above, he has a shield in his left hand and a club raised in his right hand. He also has a belt with a sword dangling from it, and we can see his two feet. Some variations on this description do exist. According to the ancient astronomer Ptolemy, Orion is holding a lion’s pelt instead of a shield, as can be seen in the accompanying diagram
from Johann Bode’s famous Uranographia star map of 1801, where Orion is depicted fighting the charging bull Taurus.

According to Greek mythology, Artemis, the goddess of hunting, fell in love with Orion.

According to Greek mythology, Artemis, the goddess of hunting, fell in love with Orion. Her brother Apollo did not want her to give up her vows of chastity, so he cooked up a devious plan wherein he challenged Artemis to use her famous bow and arrow to hit a small target in the distance. The target turned out to be her beloved Orion, whom she felled with a single shot. Being totally distraught at what she had done, she placed Orion among the stars forever.

Known collectively as the Three Kings, each star also bears an exotic-sounding name given to it by the astronomers of ancient Araby, to whom we owe a great debt.

The first part of Orion you’ll probably see is his belt, which is easily noticeable as a group of three bright stars laid out in a straight line. Known collectively as the Three Kings, each star also bears an exotic-sounding name given to it by the astronomers of ancient Araby, to whom we owe a great debt. Their names, from left to right, are Alnitak, Alnilam, and Mintaka. These are all blue supergiant stars many thousands of times brighter than the sun. But even as impressive as these stars are, they are outshone by two others in the constellation. Rigel, the blue gem located at the hunter’s forward foot, is the brightest star in Orion. It actually consists of four stars, but, because they are so close together, they appear to us as a single star. Being the 7th brightest star in the entire sky, Rigel shines like a white-hot diamond in the dark winter nights. But even the Three Kings and Rigel are relegated to second class status when compared to the true star of the
show. That honor goes to Betelgeuse, the star situated on the right shoulder of the hunter. It ranks numero uno for two reasons. First, there is its color – very few stars actually appear reddish to the naked eye, and Betelgeuse is one of them. Second, there is its astounding size. With a diameter 750 times that of the sun, if it were placed where the sun is, the Earth would be completely swallowed up inside it! Shining with the light of 100,000 suns, Betelgeuse is burning up its fuel at an alarming rate. Indeed, it is already in the last stages of its life and could destroy itself in a catastrophic explosion, known as a supernova, at any time. When it does finally blow, it will outshine the full moon! What an amazing site that will be. This is one case where I think you can be forgiven for actually wishing the death of something.

Orion Nebula… an enormous cloud of gas and dust where new stars are born.

Finally, if you avert your gaze a little and use your peripheral vision while looking at Orion’s sword, you should be able to make out a small, greenish, fuzzy patch. This tiny blotch is actually the Orion Nebula, an enormous cloud of gas and dust where new stars are born. It’s the closest such region to Earth and contains enough material to create 2,000 suns!

It’s the story of birth and death writ large in the heavens.

With all these fabulous sights in one constellation, Orion is one of the greatest showpieces of the night sky. Here we have a testament to the fact that all things that live must also eventually die, even the seemingly eternal stars. It’s the story of birth and death writ large in the heavens.