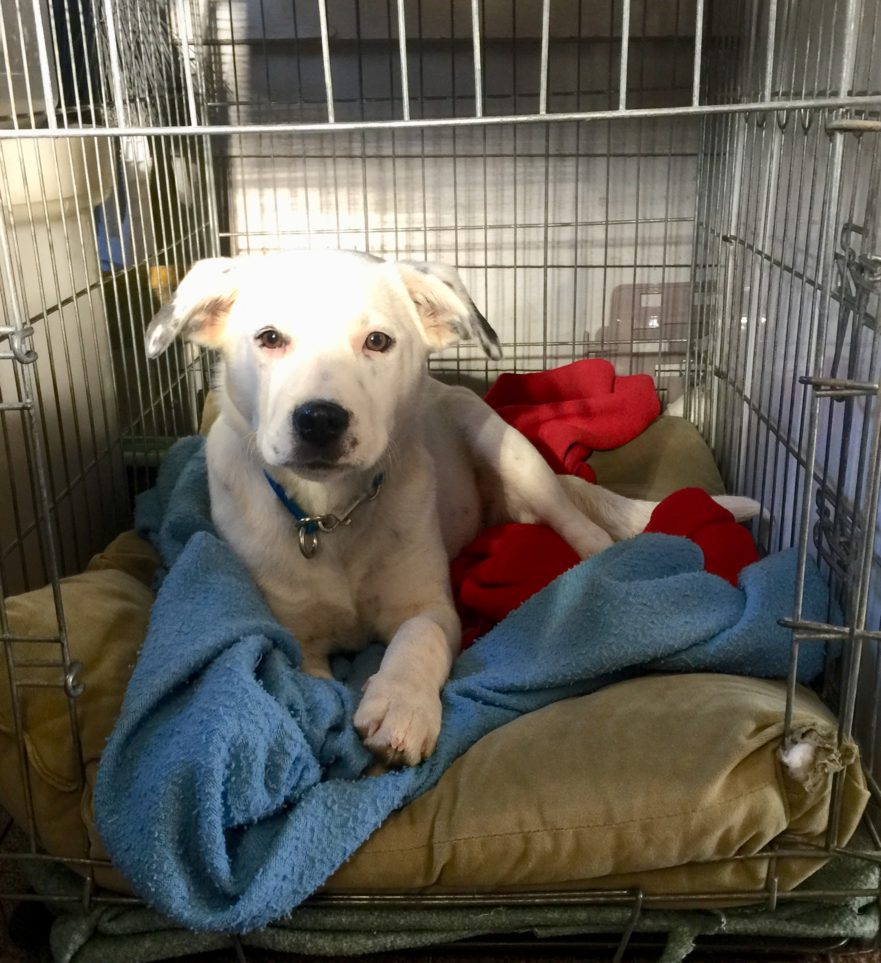 Many years ago,  a big controversy was front and foremost in the dog training world… Dog trainers and animal professionals were using a containment system to manage their dogs while working with them, training them and caring for them.

This became an idea that they tried to share with the public as a useful tool when raising puppies and dogs that were in an transition period. The idea was that this tool could help stabilize fearful or inexperienced dogs by offering them a “safe place” of their own to retreat to.

Like many new ideas, this idea was greeted by the General Public with very mixed reactions. People did not seem to be able to imagine a cage as any sort of kind place and resisted the idea that a dog might prefer to be in a small contained area than “free” in he world…

Nowadays, just about everyone who purchases or adopts a new dog will assume that they will also purchase a crate to house the dog in at least for the initial adjustment period.

The resistance to confinement, though has not changed so very much and folks are still uncertain about the reasons why they are using this tool and whether they are being fair to their dogs by using it. A lot of this uncertainty stems from a lack of true understanding about how the dog perceives this space and can lead to incorrect use of the crate in the dog’s life.

Let me first say that any space can be a prison but it is a wonderful thing to have your own space to go to. Dogs are denning creatures and like to retreat to a contained area where they can see danger approaching and can sleep eat and have babies without maintaining vigilance in all directions. A dog will head for a corner or under a table if he feels threatened or afraid. It makes sense then to offer such a place that is his own, where he can take his treasures and his treats and not be bothered by pesky humans, other animals or constant stimulation.

Of course, when we bring home a new puppy, he will not want to be isolated from everyone and he may vocalize in protest at being separated. This is why we begin this process s l o w l y…

We fill his appropriately sized crate with lots of bedding and cover it up with a blanket, leaving the door open and gradually close the door for short periods of time while he adjusts to the crate being a good place to sleep and even eat. We do not put him in the crate the first night home and leave him to “cry it out” or leave for work the next day leaving him locked inside where he has no company, no way to get out and no idea when anyone will return to save him. Sound cruel? Yes indeed but you would be amazed at how many times I hear this story! No wonder people think of the crate as a bad place…

Another scenario is when the puppy or dog has “done something bad” and is given a “time out” in his crate. His “safe place” simply cannot be used to punish him.

There are certainly times when it is convenient for us to confine puppy or separate dogs from the party and there is no reason why we cannot do so, especially once the pup has become accustomed and comfortable to his space: In fact, my dogs will often retreat there for a break or to take a quiet nap without being asked to do so and training your puppy to go through the night without going to the bathroom is much more easily accomplished using this confinement area. It is natural for a dog not to want to soil their own sleeping area. Expecting a puppy to hold her bladder for longer than she is able to tho’, is simply unreasonable. The idea of the crate is also not to isolate your puppy from you but to teach him to be able to settle down alone and you can ,gently guide him towards this end by spending time in the same room as him while he can see you from his  crate and putting the crate in your bedroom at night when you go to sleep. That way you can also hear him when he whines to go to the bathroom. “How do I know that is what he wants.” Assume he does and give him the opportunity! Yes, you may have some broken sleep the first few nights but that is part of bringing up your puppy. “Crating” then can be a totally reasonable way to shape indoor habits and also provide a bolthole for your overwhelmed canine pal.

Crates can also be a wonderful and safe way to teach the puppy to travel in the car with you, giving him his own space where he feels comfortable. Using the crate in the car will also put a stop to dangerous rowdy behavior while you are driving, will minimize the chances of him sustaining an injury in the event of an accident and will make cleanup much easier if there are mistakes in transit!

I have been using crates as a training, containment and comforting space tool for 20 years and have never had a dog suffer psychologically from the mindful use of this wonderful tool. Cover your crate with a blanket to create a nice hiding place and fill it with nesting substances to start. Many people feel that their dog should be able to see all around them while in the crate but it just makes the dog feel exposed not safe.

Good luck and remember although the words sound very similar, a CRATE is not a CAGE.