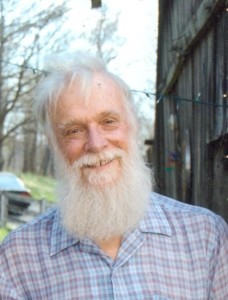 There is more than one way to see a shooting star. I like to lie out at night on the hood of my car where I can see a wide patch of sky. I look for satellites. There are so many of them that if you keep watching the sky, eventually you will see one pass from one side of your vision to the other. They look like stars but are moving more quickly through the night sky than a high flying airplane would. One night I saw two coming from opposite directions. They passed each other right overhead.

It is inevitable, if you stare at the night sky, that you will see a shooting star. There are enough of them and it will happen. But the other way to see one is to just happen to glance at a part of the sky for a quick moment and to catch a glimpse of a shooting star unexpectedly. And a greater thrill is to do it with a friend, to both see the shooting star together.

How can this happen? In the great expanse of sky, in the panorama of time, in the busyness of life, to glance at just the right place at a certain moment, and catch a marvel? But it happens all the time.

I remember riding through the prairies of North Dakota with a friend many years ago. We were on a long, straight road and were easily fifty miles from any town. There was nothing there, nothing but endless barbed wire and prairie. And then we passed a gateway. The roadside fence came together from both directions and stopped at two large poles with a cross pole overhead. Through the rough-hewn entrance way an old dirt road ran off to the horizon.

Hanging from the top pole was an old sign, so worn from the sun and wind that you couldn’t read what it said. It was hanging from two rusted chains. It had been there for many years. It was a windless day, but as my friend and I happened to glance up at the sign together, one of the chains broke and the sign began to swing from the remaining chain. What were the chances, in the long expanse of prairie, for us to look at exactly that time, for that chain to break when we passed it at sixty miles an hour?

I am positive that some things going on around me are happening because I am there and would not happen if I were not. Somehow, I am special and these events are mine; but exactly what is happening, or why, I cannot tell. I only see the residual effects.

There is more than one way to realize the truth about your relationship in life with powers you don’t understand or cannot comprehend. You can study the world’s religions and look for historical evidence of God’s intervention with man. And you can evaluate truths presented by men of letters everywhere and come to the reasonable conclusion that the universe has purpose and that there is a greater intelligence behind all the mystery. Or you can be swept away by a torrent of God’s love that overcomes you like the flood when a dam breaks.

When I was a young boy, I was in the mountains in Colorado, riding in the boot of my parent’s convertible, watching the night sky as they drove to the next vacation spot. Suddenly the sky lit up with a spectacular meteor shower. I was filled with awe and said nothing. I watched silently for many minutes as star after star fell from the sky. I never told anyone. It was special, just for me.

Many years later, in the morning hours before dawn, I was hiding at a friend’s apartment many miles from home after another friend had been murdered. I was feverish and afraid and unable to sleep. I pulled a book from my friend’s bookshelf titled Mere Christianity, by C. S. Lewis, and read it in one sitting. Revelations of God broke forth in such a spectacular array that I wept for days after. But this was not mine to keep. It is something I wanted to share with a friend.