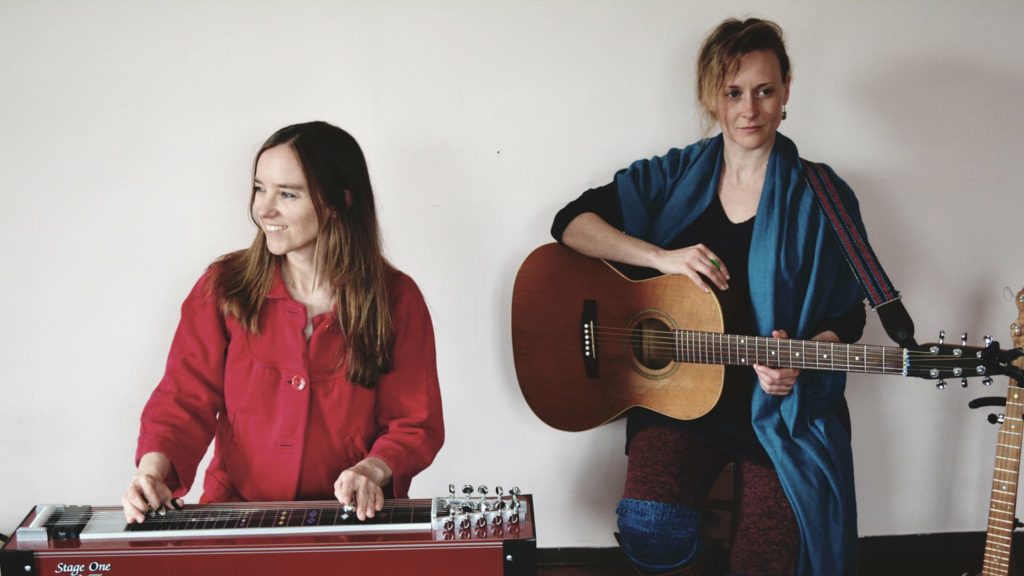 MA’AM is an unapologetic kick in the head. They’re folk. They’re blues. They’re a little indie-rock. You can’t hold them down — and why would you want to? They’re making some of the best folk music around, and the West Virginia duo — Amy McIntire and Mary Ashton (pictured above left to right) — offer discerning musings on feminist power, President Trump and failed relationships. While this collaboration is brand spanking new, still in the “honeymoon phase,” as Ashton laughs, they are obviously made for one another.

In early May, the pair made their live performance debut at downtown Lewisburg’s The Listening Room, a makeshift performance space founded by local entrepreneur and world musician Adam DeGraff. Trading off instruments, from acoustic guitar to lap steel to banjo to electric guitar, Ashton and McIntire never missed a beat. “I hadn’t been really serious about a duo until I met Mary,” McIntire talks candidly before the show.

The two met at a house party last fall where Ashton was slotted as entertainment. “I know Mary through my boyfriend Derek. They were in a play together years ago at Greenbrier Valley Theatre,” shares McIntire. Through the following weeks, they both promised to meet up and jam out, but it wasn’t until they shared a stage at the West Virginia Winter Music Festival that they fully realized the potential. “She played after me, and we did a song together,” says Ashton. And the rest is history, really.

Since then, they’ve been developing their live sets, fusing varied but similar styles together into an invigorating strain of Americana music, which borrows from the rituals of Appalachia, as well as the style of Leonard Cohen, Bonnie Raitt and Susan Tedeschi — these influences trickle like a babbling brook in and out of their work. It’s not more evident than it is in their live show, woven with cutting humor, a cool demeanor and smooth playing.

“You got it made / On the sunshine or the shade / Never seen such hard workin’ hands go to waste / Pussies bein’ grabbed / Prezie’s gone mad / So let’s not make hay,” Ashton brandishes with the soul-spun “Man Made,” a prime example of her brazen songwriting skill. On “Daddy Daddy,” she doesn’t hold back either, singing, “Big spender, cootchie catcher, callin’ off the baby maker / Whoa, may salad’s in the blender.” Her work, always delivered with a wink and a smile, harkens to Loretta Lynn and John Prine, utilizing wit to deliver painful but necessary truths.

McIntire’s songwriting is as bold and vibrant, often feeling earthier and steeped in story-song tradition. “Maggie pulled a shard of glass out of her weary hand / Her rusty lips were carved and cracked like some red canyon land,” she observes on “Maggie 40 Years Later,” a sequel to the traditional folk tune “Maggie.” Her progression of the character is natural and weathered, heartbreakingly beautiful and poignant. Then, her “Sadie Hawkins” tune takes a fickle man to task. “You said I would not love you fat / So I waited ‘round to disprove that / You said I would not love you bald / Well what my friend is your hair called?” she sings. Her heart tears in two (again) by song’s end. “You said that I would forget you / But you were wrong about that too.”

Together, Ashton and McIntire balance each other out. Both draw upon extensive playing, writing and recording backgrounds — McIntire once played as part of The Oz, while Ashton also explored ambitions in another country-leaning duo. After those collaborations ended, both sharpened their solo skills in varying degrees for a number of years. “We’ve had a similar journey leading up to this,” says Ashton, adding of lessons obtained along the way, “I learned how to play by myself as a solo act. You feel like you’re not enough, especially being a female in a male-dominated culture.”

Where McIntire blasts across the sky in starburst fashion, Ashton’s voice pins the arrangements to the ground. It’s a striking match, and five-months in, they are monster storytellers. “It took me a long time to over the fact that I wasn’t going to be a teacher,” says McIntire. And we could not be more thankful. Her destiny is music.

MA’AM isn’t for the faint-hearted, that’s for sure. While they have plans to put together an EP, the duo are taking the time to really grow and nurture their live shows. And we can’t wait to see what they could possibly do next.