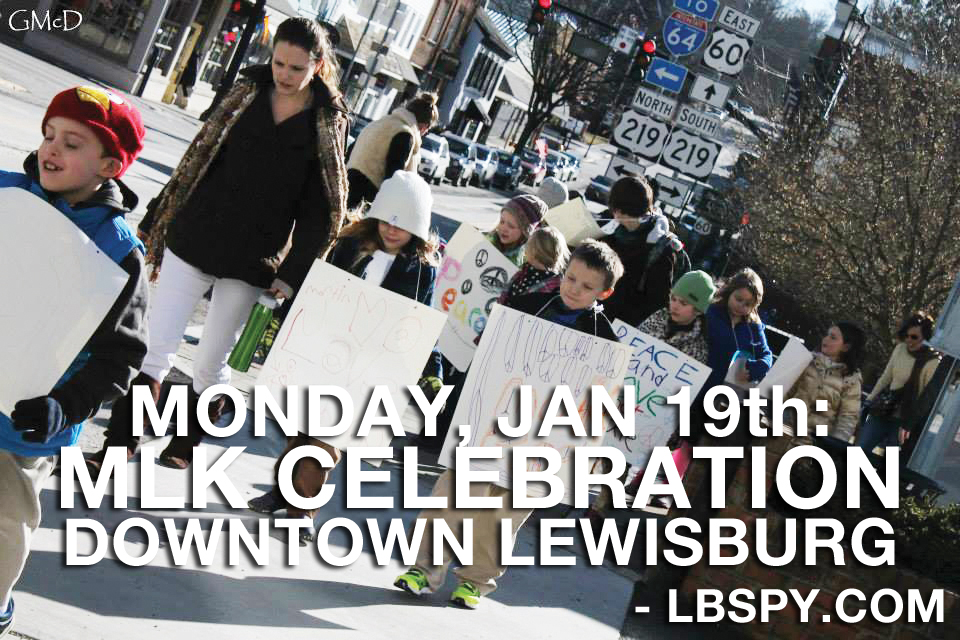 A year later, here we are, continuing to honor the tradition of the celebration of Martin Luther King, Jr.’s legacy. And while last year’s event brought emotions and passionate opinions from many sides of the issues at hand, sometimes angry, sometimes hurtful, yet sometimes kind and optimistic, I still feel that we can work through all of those concerns and disputes to reach an uplifting and encouraging day of peace and honor and music, food, and inspiration. To me, what it boils down to is basic human rights, human compassion, human benevolence and kind-heartedness, and support of the right to disagree with what any one of us believes. I, in my sometimes idealistic faith and innocence, believe that we can all move forward and work together to make it a better world. It’s not too late.

Reading more than a hundred children’s essays about Dr. King will bring you to tears. They are new to the world. They are inspired. They can bring us to our knees with the pure sentiments they convey about the world around them, making me believe the right choices can be made in this wretched time of brutality toward unarmed youth, the seemingly lack of retribution for those who cut them down in their prime, the indifference of what seems like half the populace of small towns all over the country. Read these children’s essays and you will feel better about the world, I promise. “I learned that Martin Luther King, Jr., believed in people,” says one. “He made me believe in myself…He was brave and peaceful and wanted no one to get hurt.”

The celebration in our little town has come a long way since its original inception in 1982, more than 30 years ago (two years before the federal holiday was declared for the 3rd Monday of each January). West Virginia was one of the few early states to create a Dr. Martin Luther King Jr. holiday celebration, with local observance both here and in surrounding communities. In the early 90’s Vista and Americorps developed a national day of service theme under the banner of “MLK Day – a Day On, Not Off”, and it was at that point that the celebrations became larger, with Lewisburg United Methodist Church becoming actively involved. A community meal was added, and the presentation became increasingly well-attended. (We now offer a complimentary luncheon for about 300 people! )Then the symbolic March was added, under the banner which reads, “An Injustice Anywhere Is a Threat To Justice Everywhere”. Now this event marks the largest MLK celebration in the state, with a large assemblage of all races and all ages, walking as friends, allies, partners, and celebrants!

One of the main organizers and inspirational coordinator is Steve Rutledge, a gentle soul, kind and diplomatic, compassionate and reasonable, with whom I have been proud to work for several years on this amazing committee. And, he was there from the beginning. Remember the famous photo of the Mississippi Woolworth’s lunch counter “sit-in”, where students were bombarded with mustard, paint, sugar, ashtrays, and the like? That was the spring of 1963 and Steve Rutledge was there. Within two weeks, over a thousand people were imprisoned for protesting racial inequality. Jailed three times himself, Steve was involved with people who were martyred for their pursuit of civil rights. In June, 1963, after leading a demonstration, Rutledge learned of the murder of NAACP state director Medgar Evers. He wrote of the funeral: “On a terribly hot day in June of 1963 a riot broke out in Jackson, Mississippi during the funeral procession for Medgar Evers . Dr. Martin Luther King, Jr. was in the march but his family feared for his safety and I was assigned the task of driving him to the airport and getting him there safely to protect his life. I did so…”

Rutledge came to live in Greenbrier County in the early 70s, where he remains hard at work for the Civil Rights Movement’s highest principles, and is a mainstay of the MLK committee. He says, “…it gives each of us a chance to unite with one or more other persons to make something better – it could be our family, our school, our job, or our community.”

So on January 19, 2015, many will join the march from Lewisburg’s Courthouse to Washington Street’s Lewisburg United Methodist Church. There will be a free meal all who attend, followed by a wonderful presentation including music, speakers, drumming, and inspiration, all around.

This year’s march and celebration on January 19th will feature an African-style drum corps from the Greenbrier Girls’ Academy playing the transitional rhythms to bring us from the luncheon to the sanctuary, the reading of the children’s winning essays by the authors, themselves, an awe-inspiring Gospel Choir, a presentation by the High Rocks organization, musical selections, and other memorable features. (We will miss dear sweet Clemenceau Allen, who passed just after Christmas last year, and whose rendering of the Cherokee version of Amazing Grace was a staple of our gathering, every year, in full Native American regalia. The world mourns the loss of his sweet spirit and the music he brought forth.)

The main feature of this year’s itinerary will be the showing of excerpts from the documentary about the life of Harry Belafonte documentary, entitled “Sing Your Song”. His daughters Gina Belafonte and Adrienne Biesemeyer will provide live commentary to the excerpts that include his interaction with Dr. King, as well as his own deeply convicted involvement in the Civil Rights movement, which continues to this day. And there will be a showing of the film in its entirety that evening at 4:30 at the Lewis Theatre, free of charge. It’s a wonderful film, and everyone should see it. There is a website for it, as well. singyoursongthemovie.com

So in all these years gone by, we have not forgotten the struggles of those who were there some 52 years ago for the March on Washington and the mass movements in Jackson, Mississippi, and Birmingham, Alabama. We don’t forget the loss of Medger Evers by the bullet of an assassin, the deaths of those four little girls who were only going to church in that Birmingham church bombing, to the present travesties of justice we see every day on the news, if our fragile hearts can allow us to watch. We still remember and honor the loss and suffering of anyone who cared about any of these people as individuals, sons, daughters, husbands, wives, neighbors, and friends. The battle continues, and for this one day, I can feel optimistic and uplifted.

Join us, won’t you? Line up at the Courthouse at 11am on Monday, January 19th. You will be inspired. You will have tears. You will feel love and compassion and spiritual camaraderie.

If you wish to donate to this or any future MLK Day of Remembrance, please contact us at MLK Committee, CYAC, 212 Washington St., Lewisburg, WV 24901.

Donations and/or participation would be welcome.

And remember these words in everyday life: “INJUSTICE ANYWHERE IS A THREAT TO JUSTICE EVERYWHERE.”

I’m closing with a small bit of a letter written by a member of our committee after the controversial events of last year’s celebration. “Freedom of belief and freedom of speech demand that we allow our opposing ideas to be heard without resolution… Fault, it seems to me, can only be found where rights are violated, i.e. one party or faction seeks to impose its will upon another. Acknowledging our differences and focusing on what we agree upon, we can we move forward together. “ Yes, we can.