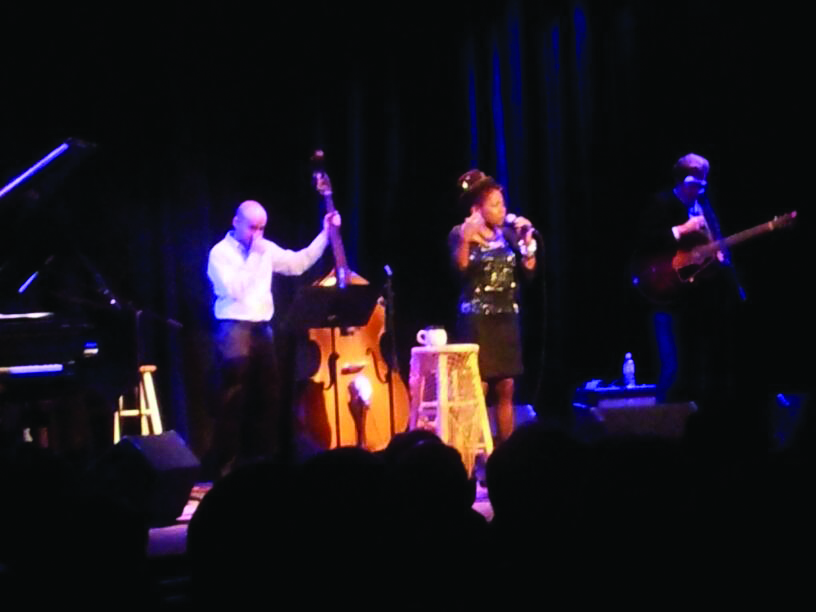 Vocalist Catherine Russell appeared recently at Carnegie Hall and thoroughly wowed the audience with a myriad of jazz, blues, swing, ballads, jump/jive/bebop tunes, and a bit of a journey through the history of belting it out, so to speak. After a fine, fine opening instrumental by her amazing jazz quartet, which set the sweet tone of anticipation of what was about to happen, out she came, and it was on. Taking the stage like a small tornado, a lightning bolt, and she had us at “Shake That Thang”, her opening tune.

The ensemble worked perfectly, taking us through every realm of my kind of jazz, the music I hear as the soundtrack to our lives, with pianist Mark Shane bringing us swingingly into the demesne of this lovely woman, this music royalty, who hailed from New York City, the offspring of her legendary father, pianist/bandleader/arranger/composer (and Louis Armstrong’s long-time collaborator and musical director) Luis Russell. Her mother, Carline Ray, herself a pioneering, Juilliard-educated bassist/guitarist/vocalist, who, impressively, performed with the International Sweethearts of Rhythm, the first integrated all women’s band in the United States. Google these ladies and you are in for a treat! The photos alone sum up all I’ve ever wanted to be a part of, musically and historically. Russell has carried on the tradition of her famous parents. She’s a graduate of American Academy of Dramatic Arts, and had has toured the world, performing and recording with David Bowie, Steely Dan, Cyndi Lauper, Jackson Browne, Michael Feinstein, Levon Helm, Paul Simon, Rosanne Cash, and many others. She was the guest vocalist for one of Charleston’s own legends, giving her all to one of Bob Thompson’s annual Joy to the World Christmas concerts. 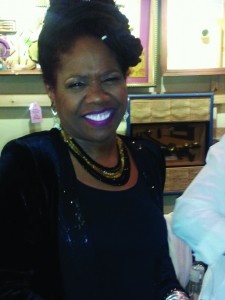 The second tune, Fats Waller’s “You’ve Got Me Under Your Thumb”, gave us a chance to know her trio a little before they took us on their lovely excursion, with a featured solo from each. Guitarist Matt Munisteri showed us the smoooooothest side of guitar tones, and, along with stand-up bassist Tal Ronen, paved the way for a captivating musical history lesson of blues and jazz.

Ms. Russell spoke about almost every song with a knowledge I greatly respected. She knew the history of the song, what year, what artist originally recorded it, as well as what was happening historically at the time. I loved that about this concert. It took us from humorous to amorous, from tough to (less often) fragile, compelling from beginning to end. My kind of jazz, people, my kind of jazz… A memorable torch song, lovingly and poignantly rendered was “In the Dark”, a song I remember from both Dinah Washington and Nina Simone, which went, “In the dark, It’s just you and I, Not a sound, There’s not one sigh, Just the beat of my poor heart, in the dark… Now, in the dark, in the dark”

I get such a thrill, When he presses his fingertips Upon my lips, And he begs me to please keep still…In the dark…” My, my…

She took us through a remarkable journey, many of the selections from her 2012 recording Strictly Romancin’, with sojourns in tribute to the bluesy Ella Fitzgerald tunes, easy-greasy version of “Everybody Loves My Baby” by Chick Webb, Pearl Bailey in the 40’s, the double-entendre-laden “Kitchen Man” straight from Bessie Smith’s 1920’s recordings, to a swingy 1918 “Darktown Strutter’s Ball”. At times she would leave the microphone completely and just sing over the shoulder of the bass player, reminding us of not only her powerhouse pipes, but also how it must have felt in the barrelhouse blues halls and gin joints back in the day. A complete crowd pleaser was the hilarious “My Man’s an Undertaker, He’s Got a Coffin Just Your Size”, also originally from Dinah Washington, if I’m not mistaken. She moved flawlessly from the raucous to the smooth and refined sounds of the Parisian tearooms and cafés. What a range, both vocally and stylistically!

Catherine’s 5th album, Bring It Back, is due to drop in February 2014 on the Jazz Village label, and will feature Jazz Age jewels and Swing Time gems derived from such greats as Esther Phillips, Little Willie John, and Al Hibbler (whose “After the Lights Go Down Low” knocked us dead at Carnegie). This CD, which is bound to be nothing less than an amazing walk through history and style, can be ordered from her website: catherinerussell.net.

It was an inspiring evening listening to the lovely way this lovely woman inhabited every song. Funny, amazing, touching, powerful, sweet, sultry (required!), Catherine Russell took over, her interpretations original, yet classic. She was great. She was Catherine the Great! An extraordinary performer, gracious to her fans afterward, this songstress is the real thing. I came out singing,
“After the lights go down low, baby, you know,

There’ll be no reason for teasin’ me so
And when the dancin’ is through and folks will be few,
I’ll be here sittin’ with no one but you
And I’ll be needin’ you so after the lights go down low…”
My, my…