Appalachia has a long and rich folklore tradition and as anyone knows who has ever sat around a campfire at night or held a flashlight under their chin, ghost stories are one of the most thrilling parts of oral tradition. Ghost stories nearly always have a shred of truth in them and many evolve over time losing or gaining details as is common with folklore.

In the town of Lewisburg, there is a very old cemetery with beautiful markers, timeworn statues and carved headstones. In the Old Stone Church Cemetery on Church Street, there are hundreds of burials including carpenters, soldiers, squires, homemakers, farmers and doctors. The rich, poor, famous and forgotten lie interred here, death being the Great Equalizer, rules us all in the very end.

Among the hundreds of graves there is a striking statue known to some as the Angel of Death.

Among the hundreds of graves there is a striking statue known to some as the Angel of Death. The beautiful yet dramatic statue is the marker for a little girl by the name of Maud Montague Matthews. She was born in 1876 on Monday, October 2 to parents Alexander and Laura. As the old poem states “Monday’s child is fair of face” and I am sure she was a lovely girl. As a child, she became ill during a pneumonia epidemic and succumbed to that condition on May 30, 1888 just a few months shy of her twelfth birthday.

Maud was buried in the Old Stone Cemetery next to the grand old Presbyterian Church. Her parents must have been in shock as just one year prior, their precious baby Anne had died at just fifteen days old. Now, tragedy had struck again taking another child of theirs, darling Maud. On the base of her white angelic statue, these words are inscribed: “ Love hath a lien nor time nor death can sever. Our own are ours forever and ever”

One year later in the year of 1889, Maud’s sister died at the age of ten and I am certain the Matthews family felt as if the Grim Reaper was living at their doorstep. Florence Vane Matthews lies buried directly next to her sister Maud and shares her angelic statue.

The story, as if not gloomy enough, takes a bizarre twist. Shortly after the statue was erected just a few years after Maud’s death, her young twin cousins came to visit her grave. Before leaving her grave, they each kissed the angel’s cheek. They considered Maud not only a cousin but also a best friend. Soon afterwards, they both perished by the end of the year. One of the girls contracted the influenza virus and the other was a victim of a carriage ride gone wrong. Through the decades, there have been whispers of a local legend that says whoever kisses the angel will suffer the same tragic fate and be dead within a year.

Stories such as this one can be found worldwide. Tales of grievous statues of death, headstones that eerily glow, hound dogs of hell barking at night on a graveyard hill and apparitions who walk among the stones just seem to go hand in hand with the popularity of ghostly tales and the paranormal. I can tell you this for sure. On my visits to the Old Stone Church Cemetery, I pay my respects to Maud and often take a flower to her grave.

What is that you ask?? Did I ever kiss the cheek of the Death Angel? I’m still here, aren’t I?? 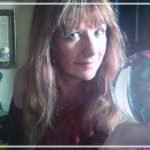 Sherri Brake is the owner of Haunted Heartland Tours. She is a Paranormal Researcher/Historian , Author, Columnist & Guide. Brake has over 25 years in the field of paranormal research. She finds the best locations possible to explore dark history & alleged hauntings. No huge public crowds for her and her team as they like to keep their numbers down so you get a better experience.