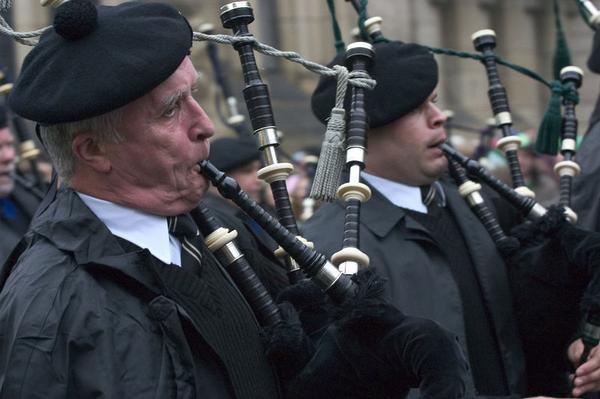 Every year on March 17th, the Irish and the Irish-at-heart observe St. Patrick’s Day. This day began as a religious feast day for the patron saint of Ireland and has become an international festival celebrating Irish culture with parades, dancing, special foods and a whole lot of green.

In Ireland, St. Patrick’s day is observed with religious services and feasts to recognize the patron saint of Ireland who was born in Roman Britain in the late 4th century. At age 16, he was kidnapped and taken to Ireland as a slave. He escaped but returned about 432 to convert the Irish to Christianity. By the time of his death on March 17, 461, he had established monasteries, churches, and schools. Many legends grew up around him, one of which was that he drove the snakes out of Ireland and used the shamrock to explain the Trinity.

It was emigrants, particularly to the United States, who transformed St. Patrick’s Day into a largely secular holiday of revelry and celebration of things Irish. Nearly 122 million Americans, which is about 39% of the population, say the celebrate St. Patrick’s Day.

Between 1820 and 1930, nearly 4.5 million Irish immigrants arrived in the United States and more than 34.7 million US residents claim Irish ancestry. This is more than 7 times the population of Ireland! West Virginia’s population with Irish ancestry is between 10-15 million. There is even a town in West Virginia called Ireland. It is an unincorporated community in Lewis County, which was named for Andrew Wilson, its first settler, who was a native of Ireland.

In Lewisburg, St. Patrick’s Day festivities are plentiful! The Asylum will have drink specials all day and night! The GREEN BEER will flow at the Sweet Shoppe with karaoke/dj Penny C from 10-late night.

Co-owned by a native of Ireland, Patrick O’ Flaherty, The Irish Pub will be packed with activity from 3pm to 1am Traditional Celtic musician, Patrick O’ Flaherty, will play live music throughout the day. At 6pm, Grand Marshall Jim Morgan will lead the World’s Shortest St. Patrick’s Day Parade Ever! This parade starts at The Wild Bean and line up is at 5:30pm. If you are interested in joining the parade, sign up at the Irish Pub, everyone is welcome to participate! There will be a food special featuring their Famous Corned Beef Hash and there will lots of giveaways including a raffle to win a very rare Midleton Irish Whiskey. Finnbarr, the Irish wolfhound, is also making his annual appearance!

Very few things in this world have the same unifying power as St. Patrick’s Day. We are all a little Irish on this special day and we’re more than willing to wear a little green to show it. So no matter where you are, get out and celebrate this March 17th.