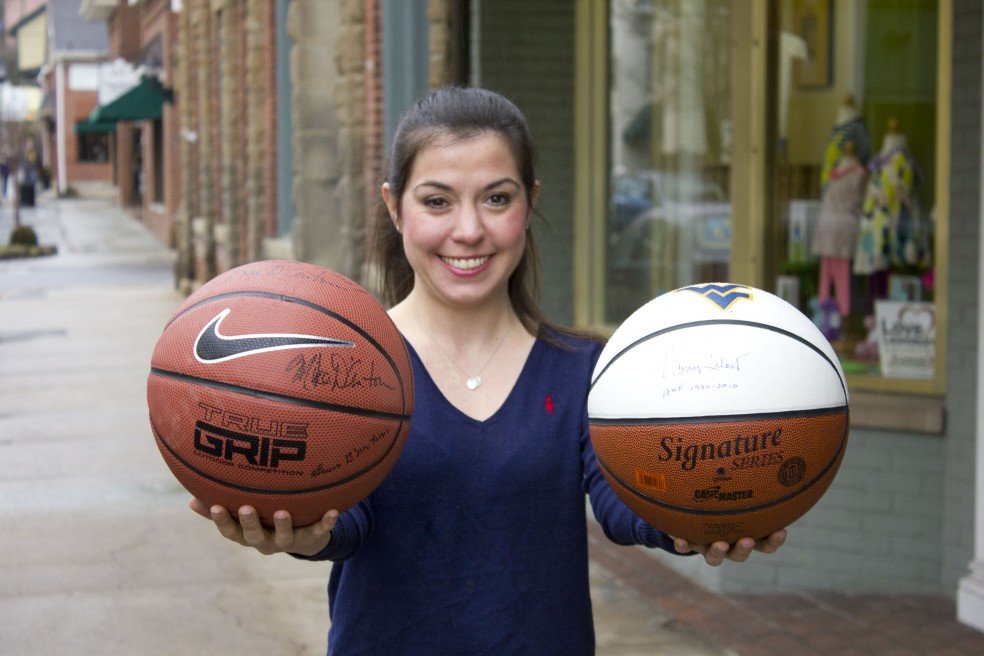 March madness is all about basketball! To celebrate the season, Siobhan Winters from Love Child is raffling away 2 basketballs signed by several West Virginia legends in order to benefit the Lewisburg/Fairlea foodlocker. The food locker provides meals to those in need in our community and what better way to help those people than with a fun raffle!

The legendary Jerry West has autographed one of the basketballs. Jerry, who is also known as “The Logo”, is the all-time great at West Virginia University (WVU). He led WVU to their first ever NCAA Final Four appearance. His career moved forward with the Los Angeles Lakers, 14 years as a player, 3 years as a coach, and then as the GM of the Lakers.

The legendary D’Antoni Family has autographed the second ball. Mike D’Antoni is the current associate head coach of the NBA’s Philadelphia 76’s. He has been the head coach of the Phoenix Suns, the New York Nicks, and the Los Angeles Lakers. Dan D’Antoni, who joined his brother as an assistant coach in Phoenix, New York, and LA, is the current coach of the Marshall Thundering Herd. Their father, 102 years young, Lewis D’Antoni, is a high school coaching legend in the state of West Virginia.

Siobhan realized the need to help the Food Locker while working there as a volunteer.
Their mission is to provide healthy food, primarily staples, to low-income individuals and families on a monthly basis. It is an ecumenical ministry, supported by the churches of the Greater Lewisburg Community and located at Old Stone Church in Lewisburg. This assistance enables our community members to extend their grocery dollars so they can enjoy a healthier diet. The service area includes: Maxwelton, Lewisburg, Fairlea, Clintonville and Caldwell, WV.

Anyone who is a fan of basketball knows the contributions these men have made to the sport and to our great state. Please help out the residents of our county by purchasing a ticket for this raffle. Tickets may be purchased at Love Child, located at 124 W. Washington Street in downtown Lewisburg. Tickets are 1 for $10 or 3 for $25. 100% of the proceeds go to the Lewisburg/Fairlea Food Locker. Deadline for raffle entries is Saturday, April 2nd at 5pm. The Drawing will be held at 6pm on April 2nd. For additional information, call Siobhan at Love Child: 304-520-4934.