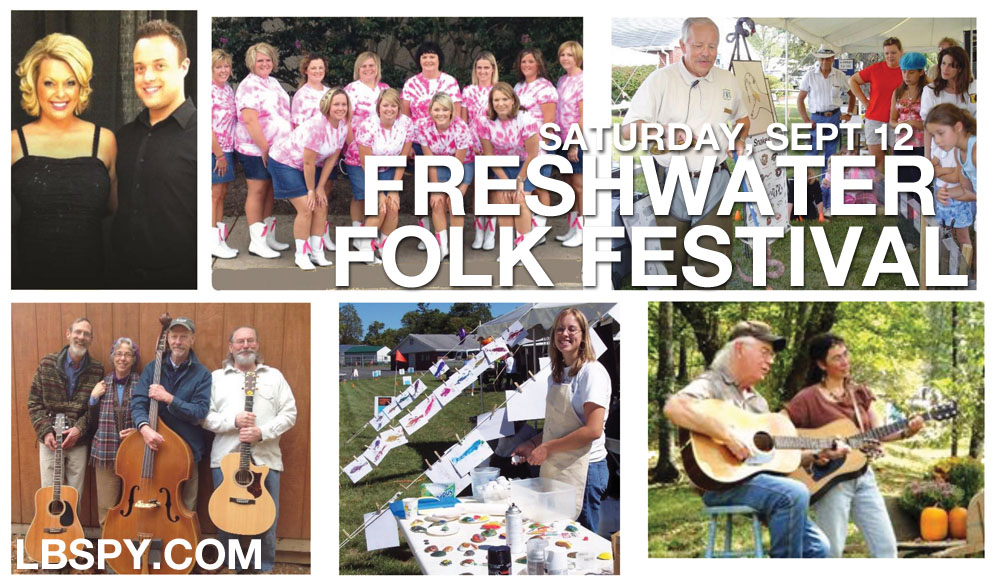 In the hope of warmer weather, the Freshwater Folk Festival at the White Sulphur Springs National Fish Hatchery on East Main Street will be on Saturday, September 12 from 10 AM to 4 PM. That’s about three weeks closer to the summer solstice than in previous years. This festival is a combination of music, dance, art, nature studies, and hands-on activities on the beautiful hatchery grounds. The trout and mussels at the hatchery will be enjoying the freshwater all that time, and hatchery tours will feature them. There will be plenty of food for sale by commercial vendors and the 4-H Club kids, and there will be crafts vendors too.

In the order that they perform, musicians and dancers come from Greenbrier, Alleghany, Pocahontas, and Randolph Counties. As the day unfolds, their musical genres will generally transition from the contemporary, to late 20th century, to good old time music of the mountains. The hills will be alive.

The singing of Ari Vaughn accompanied by Travis Farley will open the entertainment at the hatchery amphitheater at 10 AM. Her repertoire consists mostly of contemporary country music. She is well known in Greenbrier County, but she has also performed in Nashville. The Kountry Kickers of Covington will follow that up with a clogging performance extraordinaire.

The harmonious musical harmonies of Rush Run Philharmonic up Hillsboro way will be heard from noon till 2 PM. The guitarists and vocalists, Phil Rolleston and Patrick Gabbert, have been a part of the folk music scene for decades, performing solo and in bands all over the eastern USA. Bob and Ginger Must provide standup bass and vocal music to render a euphonious whole.

Michael and Carrie Kline of Elkins will be next at 2 PM. Back in late March, they were a hit at Carnegie Hall in Lewisburg as part of the Floyd Radio Show. Michael and Carrie perform tight, high mountain harmonies of traditional Appalachian music and some contemporary songs on guitar and voice.

The mainstay of the festival is the plethora of hands-on activities, demonstrations, and displays relating to appreciation and preservation of freshwater habitats and nature in general. Sharon Ginsburg and Jessica Levine will once again keep the kids busy with nature-related art projects.

The new Twin Fawns Trail’s one-mile loop on the hill behind the hatchery will be featured with retired forest ranger Jim Miller leading tree-identification walks. Fly fishing skills will be taught by Trout Unlimited, and folks will get to see impressive birds provided by the Avian Center of Appalachia. Local watershed associations will promote preservation of the freshwater environment.

Parking for the festival will be in the northwest corner of the hatchery grounds reached by entering via Hemlock Drive about 100 yards west of the main hatchery entrance.

This event is presented by the Friends of the White Sulphur Springs National Fish Hatchery and sponsored by businesses, several individuals and couples, the WV Division of Culture and History, the Greenbrier County Commission, and the Greenbrier County Conventions and Visitors Bureau. For more information see freshwaterfolkfestival.org or call 304-646-0602.

SOME ADDITIONAL TIDBITS:
The freshwater mussel project at the White Sulphur Springs National Fish Hatchery is fascinating because of the complexities of the mussels’ lifecycle. The mussels are important in maintaining good water quality.

Flying fish are a part of the festival in that several kites designed to look like fish are put aloft by kids during the day when the breeze is right.

Many children enjoy watching the rainbow trout in one of the outdoor pools lunge for the food that the kids throw to them. The food is available from a vending machine next to the pool, and the quarters are used to fund the festival.

When the urge to dance grabs someone sitting on a bench or in a lawn chair at the amphitheater, there will be a convenient plywood dance floor right in front of the stage.

A lawn chair that a person brings to the festival will be more comfortable than the benches at the amphitheater.