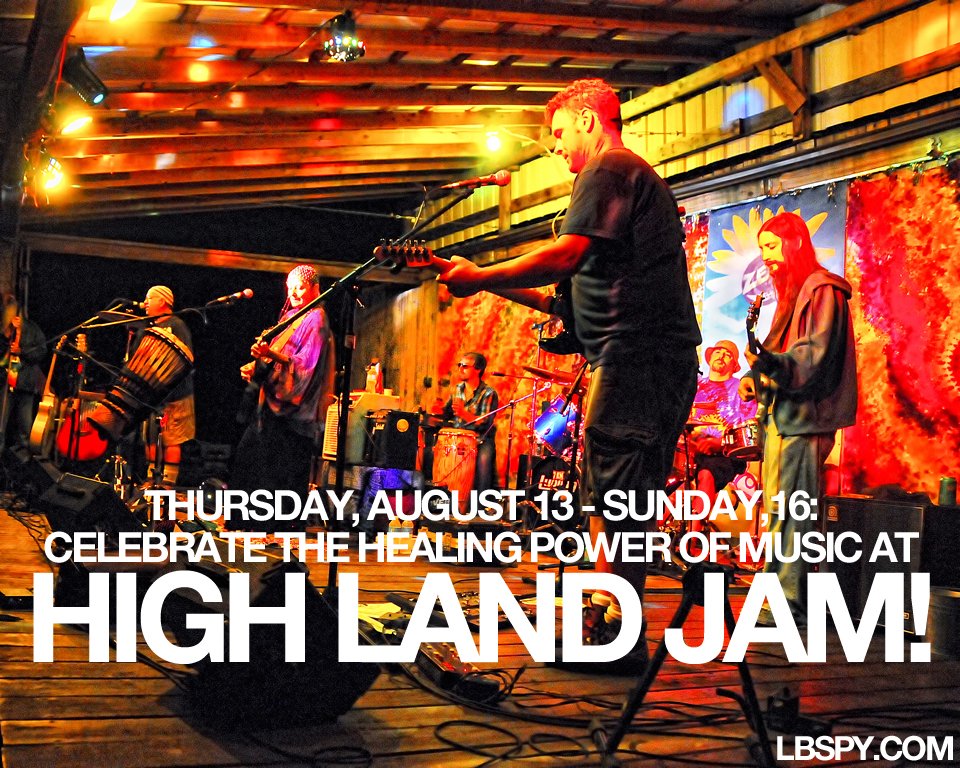 Summertime is festival time. Every state and county in America celebrates its community, its people, its culture and its history with weeklong or weekend events that bring neighbors together to share in each others lives for just a short period on time. The High Land Jam is no different.

Established in Elkins in 2002 on the Pegasus Farm, a 29-acre tract of land just south of the city limits, the High Land Jam brings together musicians from all over the country every August to celebrate life and the healing power of music. Many of the bands have been coming back to this West Virginia musical oasis since the very first get-together.

“We have watched our musical family grow up from infant college bands to seasoned, mature musicians who play for the love of music, not for the profit in it,” explained Bonnie Branciaroli, Pegasus Farm co-owner and Jam promoter, “It’s a real joy to greet every member of this musical family every year.”

“It’s a musical reunion of family and friends,” summed up Mark, Bonnie’s husband. “We have watched these folks grow up, get married, have children. It’s a wonder of life!”

History of the JAM: The first High Land Jam was held in September of 2003. Billed as “A Celebration to the Healing Power of Music,” the High Land Jam was the culmination of many events that impacted the lives of Mark and Bonnie during that time.

“I have to say this is absolutely the most amazing place! Very peaceful and beautiful! I had a GREAT time at High Land Jam and will most def be returning next year and years to come!! Thank you so much for the amazing time!!” Amy Smith, via facebook.

In March of 2002, Bonnie was diagnosed with advanced colon cancer. To keep Bonnie in a positive spirit while undergoing chemotherapy, Mark booked time in a local studio, Lone Wolf Productions, owned and operated by well-known local jazz guitarist and rock shredder, Seth Maynard. The outcome of this venture was a full-length CD, “Garden of Life,” and the beginning of the band, ZEN (featured photo).

ZEN debuted in November 2002 at a Snowshoe Mtn. Resort performance. In March of 2003, Mark and Bonnie journeyed to Colorado on a recuperative seven-week trip in a 1984 renovated school bus (now known as ZEN 1). This cross-country trip lead to an introduction to what the press was calling “neo-hippies”, i.e. the Jam Band scene.

The High Land Jam is now in its twelfth year, although the couple refer to it as the 14th Annual. Somewhere along the way, they produced more than one annual event and the numbers have been mixed up ever since. It’s an ongoing “inside” joke among the attendees who have been coming to this event for as long as the musicians.

As the years rolled by, the High Land Jam has become a musical reunion for the musicians and bands who have graced the stages year after year. It’s a reunion of the attendees as well, and some years a special time when former members of the band, ZEN, reunite. In 2007, the 29-acre farm grew into a beautiful campground with RV sites, full hookups, and one of the finest shower houses this side of the Mississippi. Pegasus Farm Campground, though, is still the mild oasis for this family affair.

The core members of the band ZEN will celebrate 13 years of playing music together this year. Mark and Bonnie, Seth Maynard, Cam Tenney have rolled with the changes, delighted in the journey, and reveled in the music. Drummer, Andy Wilmoth, WVU student who grew into a professional Nashville drummer, returns every year to keep ZEN on the beat.

“As long as we are old enough to breath and young enough to move to the rhythm, ZEN will always ‘celebrate the healing power of music,’” said Bonnie as she turned to hug Mark, the man who saved her life and created this unique venture and musical tradition.

Pegasus Farm Campground is located off US250/219, south of Elkins. Just follow the signs to become part of the family!