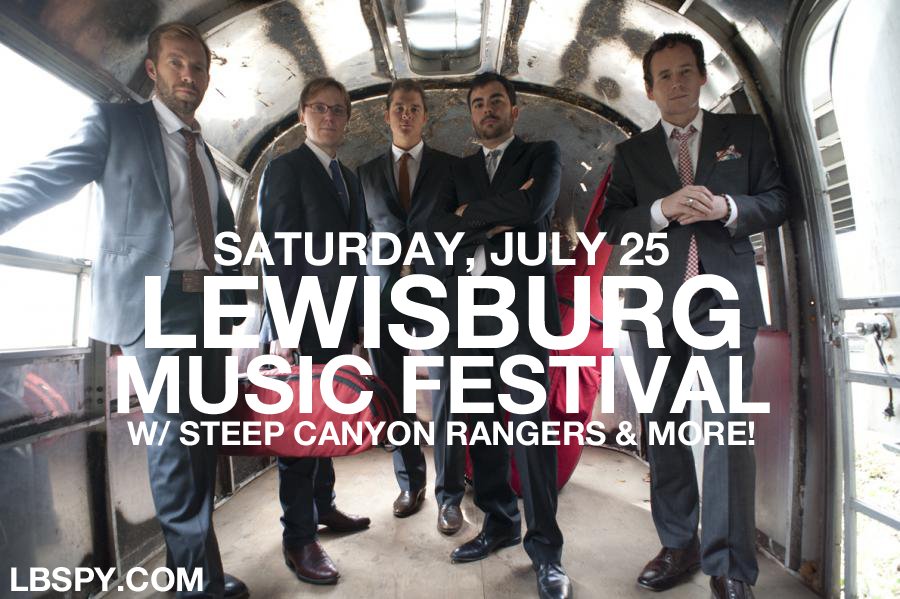 So, as I’m writing this on the hottest day of the year so far, coming down to the last-minute wire for column submission, yet I feel the need to begin my column with a Haiku written from one of my day jobs. I challenge all LBSPY readers to submit a summer haiku that sums up your day, as this one did mine.

And so, the second year of the LEWISBURG MUSIC FESTIVAL is nearly upon us. A day of excellent music on the lawn, hot summertime fun, hard-working folks putting it all together for us, all while making it look easy. Last year’s music festival was a pretty fine success with more than 600 tickets sold, and certainly we expect the sequel to be bigger, bolder, and better. Hot summertime fun, yes, but with shade; yes there is shade upon that beautiful lawn, for those of us who are pale, shade to help us ward off arm and knee freckles and sunburn through our clothes (one Floydfest, I swear, through my clothes!) The festival is one day only, JULY 25 from 2-10 PM, but it’s a day plumb chock full of fabulousness with the following lineup:

The Steep Canyon Rangers: together for a dozen years plus, these are the guys (guitarist Woody Platt, Graham Sharp on banjo, bassist Charles Humphrey ,Mike Guggino on mandolin, fiddler Nicky Sanders, and Mike Ashworth with the box kit). They keep upping their game by playing many different kinds of venues and doing up to 150 dates a year, collaborating with lots of talented folks, my favorites being Steve Martin and Edie Brickell, whose recording Love Has Come for You is a jewel of an album. Check it out at https://www.youtube.com/watch?v=0aAy6YPCe-4 because it’s lovely.

David Wax Museum: this band played at Carnegie two years ago, and I wrote all about them for LBSPY. You can access the column in our archives if you want to read the whole thing. It began like this. “A rainy night in Lewisburg, but there’s music to be heard, something not the run-of-the-mill, something young and different. Something with a girl and an accordion. Something with a nice young man in a suit and his sweetly scruffy companions.” The of David Wax and Sue Slezak played an interesting array of instruments, including keyboards, violin, the jawbone of a donkey (I am not making that up), and a red red accordion. They were original and gracious, funny one minute and poignantly heartbreaking the next. They played a song that stayed with me called “Beatrice”. “Have you ever seen a badger and armadillo kiss? Have you ever watched a sidewinder flail and twitch? Beatrice
Once when the moon hung low like this, Beatrice, Two tamarind trees bent to touch through the mist, Beatrice…” Just great.

Yarn: categorized as alternative country/Americana (that’s what they say when they’re not sure where to put you), this is a hard-touring, hard-working band whose praise and gratitude for their mostly hipster-esque young and loyal fans have created a sense of family everywhere they go. Led by Blake Christiana, other members are Trevor MacArthur, Rod Hohl, Rick Bugel, and Robert Bonhomme.

Sarah Lee Guthrie & Johnny Irion: Sarah, daughter of Arlo, has been recording with husband Johnny Irion for almost ten years, with self-described explorations of sonic horizons, and now they have a new release about to be out in early August called Wassaic Way. Relix says, “Moves seamlessly from Beck-meets-Beatles rock to soundscapes, folk-roots and Beach Boys summertime rock… [with] a sincerity that is undeniable.”

Qiet, (which the computer does not wish me to type without a U following the Q, no matter how many times I try) is, and I quote, “the culmination of this wild and wondrous world, infused with every culture on the planet and refined in the mountains of West Virginia… A balance of high-energy chaos and perfect order, they combine the elegant excesses of 1920’s jazz with the unpredictably of pure punk rock, what results is not just a show – it is an experience.” Wow. They are Christopher Vincent – Lead vocal & Guitar, Alasha Al-Qudwah- Violin & Viola, Max Venoy- Trumpet & Guitar, James Maddox- Bass, and Steve Barker- Drums, and they sound really interesting to me, though I admit they’ve escaped my auditory radar up ‘til now.

The Black Mountain Bluegrass Boys: known well by all of us around here and throughout the state, these guys have been playing together in one combination or another since 1968. The “high, lonesome sound” lives on, and these guys know how to deliver, crowd-pleasers every time, with a fierce passion for the sense of the traditional, and with the sense of humor ever present in every performance. The members are Richard Hefner on banjo, Rick Carpenter on mandolin, Chris Nickell on guitar, and Mike Smith on upright bass. Now, that’s a band.

So that’s it, that’s who you can hear if you come to this thing. Food and beverage vendors will be on site the day of the festival. Family friendly, bring your friends and family and everyone and enjoy a day of music on the lawn at Carnegie Hall in our lovely Lewisburg. Tickets are on sale now at Carnegie or at: lewisburgmusicfestival.com

Oh, and readers, get to those haikus, please.