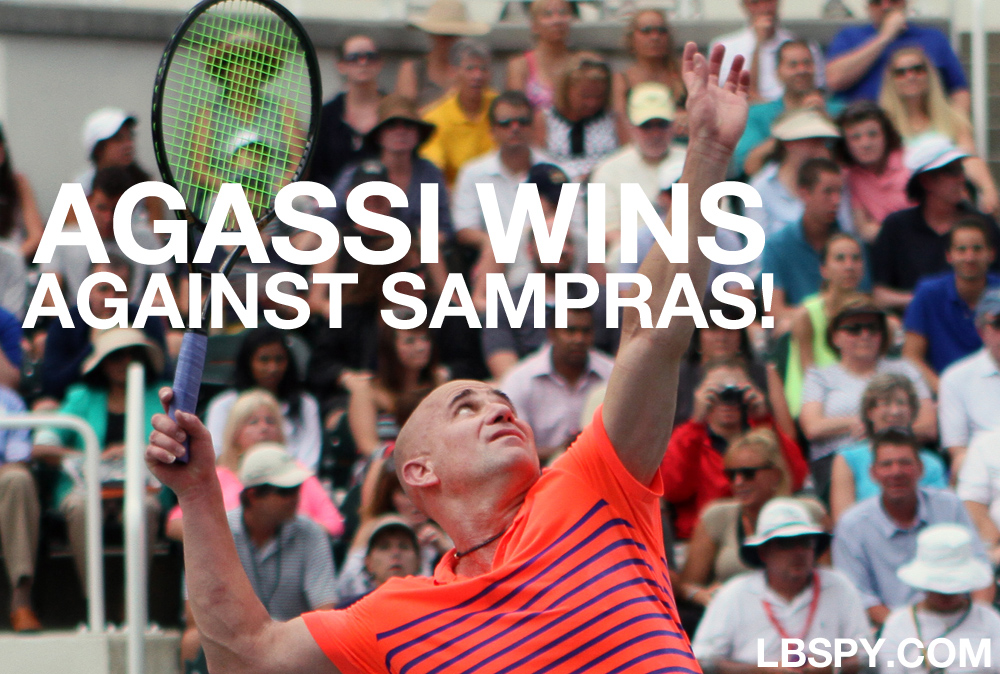 Playing their 35th match since first meeting at the 1990 US Open Grand Slam final, Andre Agassi won 2 sets to 1 against Pete Sampras at the Grand Opening of the Greenbrier’s Center Court at Creekside on Sunday, June 21st 2015. (photos by GreenbrierImages.com)

Over a 12 year span, Sampras has won 20 of 34 matches against Agassi. This recent event, held at the new state-of-the-art outdoor tennis stadium, was coined the Agassi-Sampras Rivalry because of their competitive past. 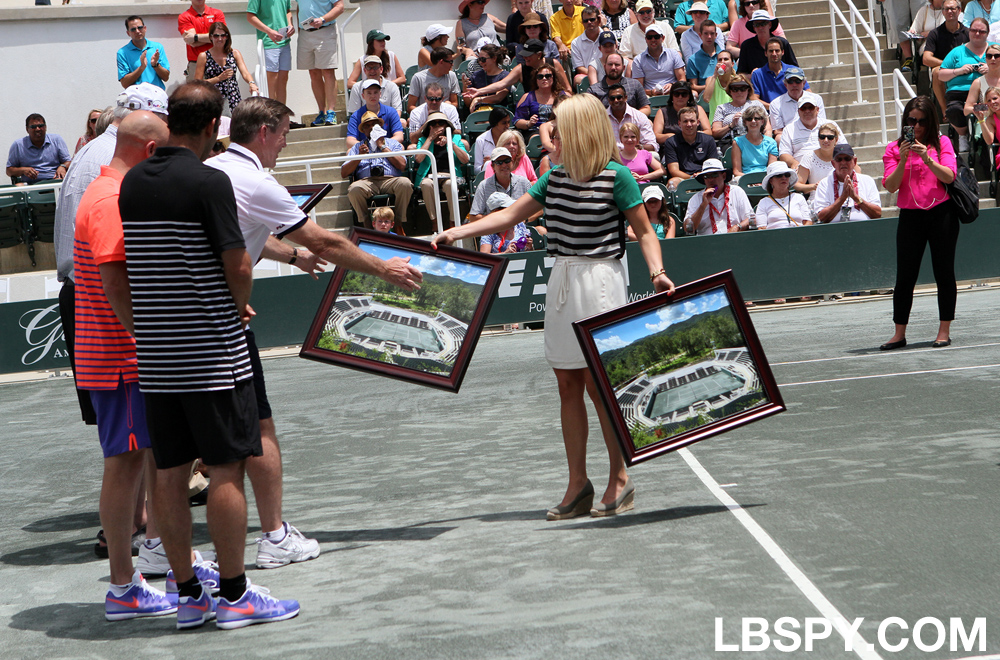 During Opening Ceremony, artwork of Center Court was awarded to Matt Rosetti, the architect behind the stadium and Terry Deremer, The Greenbrier’s director of tennis. 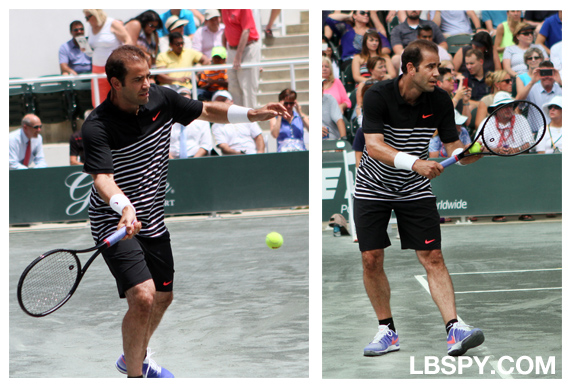 Pete Sampras is a tennis hall-of-famer and fourteen time Grand Slam winner. Playing the Greenbrier’s Inaugural Champions Tennis Classic in 2012 and again in 2013 and 2014, he was named The Greenbrier’s first-ever Tennis Pro Emeritus in April of 2014. On the Greenbrier courts, he’s played fellow Hall-of-Famer John McEnroe, Andy Roddick, Tommy Haas, Ivan Lendl and others. “Pete Sampras is the consummate gentleman ambassador for the international sport of tennis, and we couldn’t be more thrilled to welcome him back to The Greenbrier and count him among our legendary group of sports pros representing America’s Resort,” says Jim Justice, owner of The Greenbrier.

Former world no. 1 and winner of eight Grand Slam titles, Andre Agassi, has been referred to by many as one of the most dominant tennis players in the history of the game. Saturday was Agassi’s first appearance at The Greenbrier’s Center Court.

Right after a shout-out to honor West Virginia Day and just 30 minutes into the match, rain poured from the sky. We all ducked for cover. In the middle I’m photographed with a family from Oak Hill, West Virginia. The match was rescheduled for the following day on Father’s Day.

On Sunday afternoon, and after LOTS of hard work to clear off several inches of overnight rain, the clay court was in optimal shape and the match was back on. 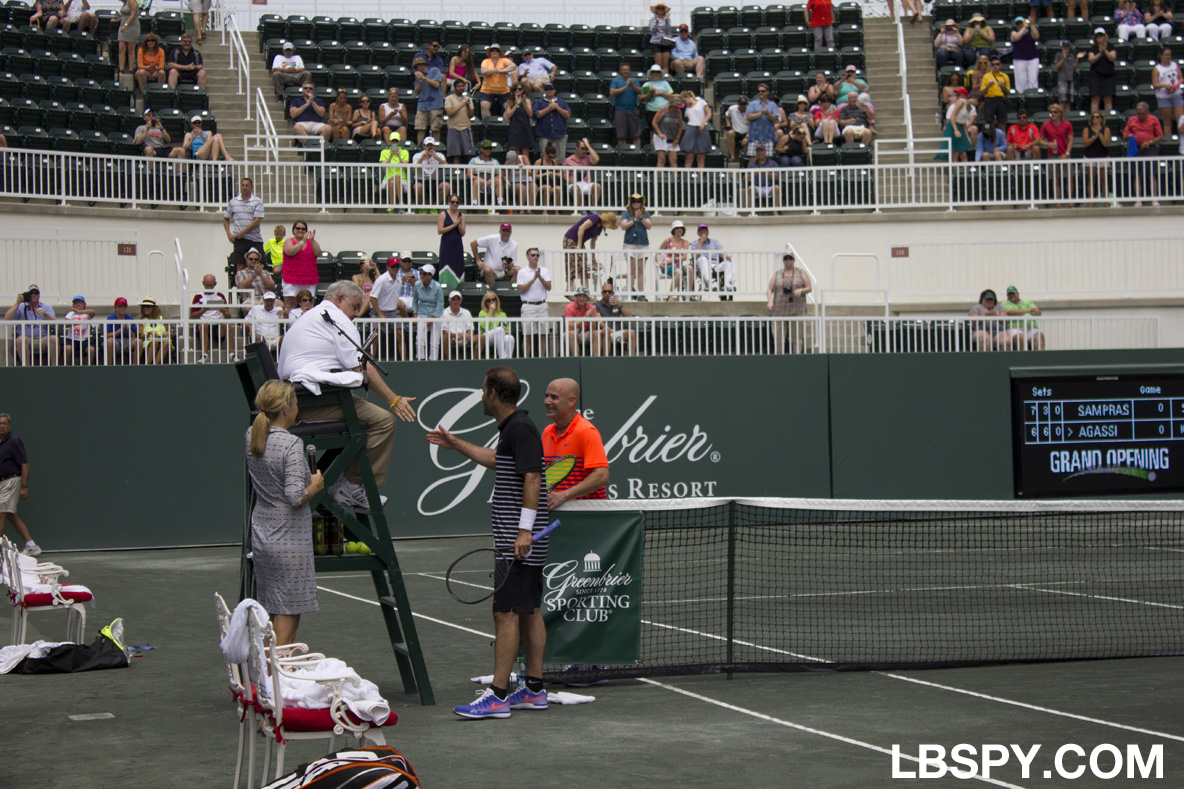 In the end, Agassi won 2 sets to 1 against his longtime rival and friend, Pete Sampras. 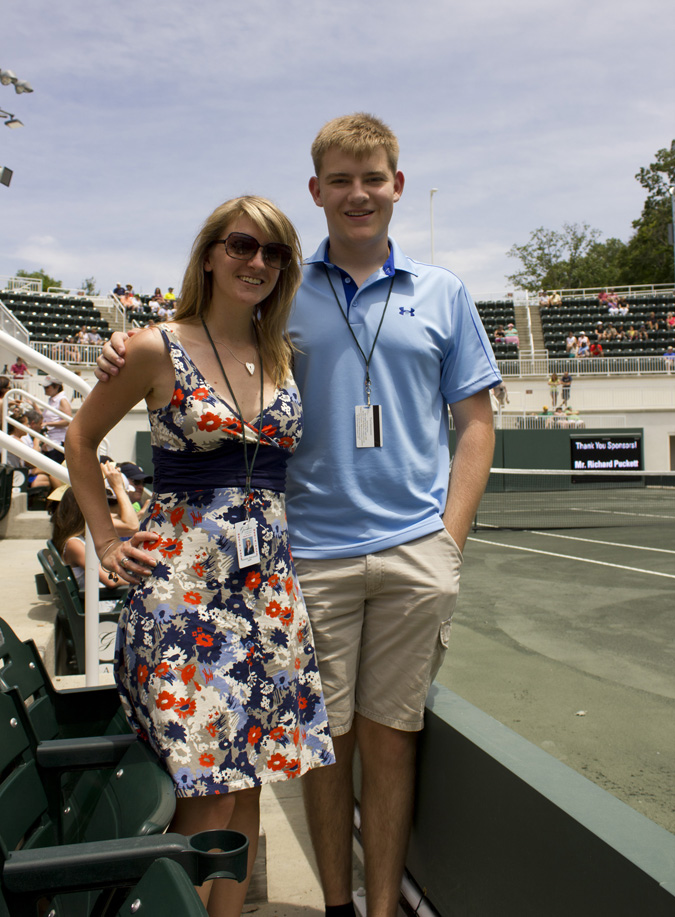 While enjoying the match, I happened to be seated beside Ronceverte, WV resident, Ben Anderson. I must say that Ben is the smartest and most hard working 16 year old I ever met. Covering local and national sports since age 14, he’s Editor-in-Chief and webmaster for international sports newspaper called, Vavel. Vavel.com. Check him out! 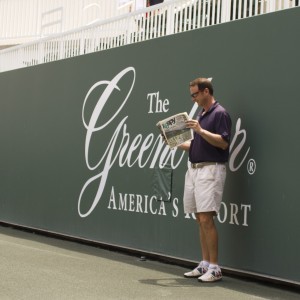 We also had some fun on instagram! Our caption is: “When the line umpire wasn’t calling the shots, he was focused on LBSPY!” Kidding of course, but Line Umpire Jeff does enjoy the publication in his off-time.

Despite the rain, this event was excellent and the stadium is a work of art. If you are interested in professional tennis, plan to visit this Fall. From September 26-27th, 2015, the Greenbrier Tennis Champions at Center Court will be held. The Athletes include Pete Sampras, James Blake, Jim Courier, and John McEnroe. It will be GAME ON! and we hope to see you there! For additional information, visit Greenbrier.com/TennisClassic

A BIG thank you to Jenny Harnish w/ Greenbrier Images! Your photos are top of the line and LBSPY appreciates your talent!