This April – Emerge From Winter Slumber 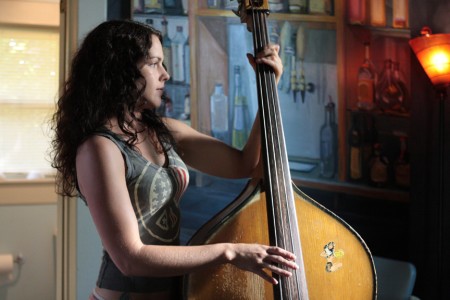 As winter subsides into memory and spring brings new life to the mountain landscape, folks all up and down the US 219 corridor are emerging from their winter slumber. Boaters are back out enjoying the high water levels, foragers are scouring forest floors for ramps and morels, and of course all sorts of folks are bringing the banjo back out on the porch for some traditional Appalachian music and dancing.

The Mountain Music Trail compiles all the best traditional music events in our region in one place, making it easy for you to engage with our heritage music, which is as alive today as the flowers that dot the valley floors. You can check out our website calendar for an updated listing of all the great opportunities to enjoy old-time music, but here’s a quick run-down of some of this month’s highlights.

The weekend of April 10-11, the Purple Fiddle in Thomas plays host to two great acts not to be missed. Friday promises to be a rowdy good time with the Hackensaw Boys, who have their “feet firmly planted in the old-time song tradition, hands soiled by the dirt of rock n’ roll and eyes fixed steadily on the future of real country music.” Then Saturday, Feufollet “takes Cajun, honky-tonk, and string-band music as their starting point, and keeps an open mind about where their song craft will lead them.”

Thursday, April 16 kicks off a long weekend full of traditional dancing. Starting at Carnegie Hall in Lewisburg, swing yer partner at the old-time square dance, with calling by Mike Costello and music by Farm Use Only. When you’re too tired to go on dancing, stroll down to the Irish Pub for a cool-down pint and some well-crafted original and traditional songs that are “heartfelt, haunting, humorous, and all things in between” by local duo Little Sparrow. Friday the 17th, the Augusta Heritage Center in Elkins hosts its monthly square dance, with music by the Iron Leg Boys and caller Bill Ohse. Saturday, head back down south to Monroe County, where the Valley Bluegrass Band play for a dance at the old Greenville High School ‘Time Out’ building. Alternately, stick around Elkins, Hillbilly Idol “draws from the deep, rich well of American music to blend an original hybrid sound they call Town and Country Music” at the Randolph County Community Arts Center, or keep going north to the Purple Fiddle in Thomas for the Hillbilly Gypsies and their old-timey bluegrass sound and high-energy barn party atmosphere. If you’re interested in honing your flat-picking skills, the Brazenhead Inn just north of Snowshoe is also hosting their annual String Break, a weekend of guitar workshops and performances with Robin Kessinger.

The weekend of April 24 and 25, ramp season is in full swing and there are plenty of chances to celebrate our native wild leek with music and dancing. Start out Friday night at the Purple Fiddle, where Brooklyn-based Yarn offer up “classic honky-tonk country tempered with a dash of contemporary urban angst.” Stop in downtown Elkins on your way south Saturday for the Ramps & Rails Festival, but make sure to be at the Pretty Penny Café in Hillsboro by 4:00, when WV’s longest-running bluegrass band the Black Mountain Bluegrass Boys take the stage at the ramp dinner. Once you’ve had your fill, head just up the road to Marlinton, where the Sweetback Sisters “combine the soul of classic Nashville with an undeniably contemporary edge” at the Pocahontas Opera House. Stick around Pocahontas County overnight for the Spring live Bluegrass and Old-Time Sunday at the Allegheny Mountain Radio studio in Frost. Other variations on that weekend itinerary could include the Spring Sing folksingers’ weekend at the Brazenhead Inn, or the Ramp Supper and square dance in Helvetia Saturday night.

Wednesday, April 29, the Darden Mill in Elkins, home to the Appalachian Forest Heritage Area Discovery Center, hosts Rebecca Wudarski (pictured) and Heather Hannah, who honor the integrity and musicianship of traditional music while offering modern offbeat songwriting and beautiful gutsy arrangements of old folk favorites. And while there are plenty of other opportunities to catch live traditional music that weekend, whatever you do don’t miss Jayme Stone’s Lomax Project at Carnegie Hall on Saturday, May 2. Stone and WV native Tim O’Brien re-imagine songs Alan Lomax (one of the great American field collectors of folk music of the 20th century) collected during his 50+ years of recording of folk music, including Bahamian sea chanteys, African-American a cappella chants from the Georgia Sea Islands, weavers’ work songs and ancient Appalachian ballads, as well as newly-penned songs inspired by the sounds, stories and melodies they’ve found.

There are lots more great events we don’t have room for here – check out MountainMusicTrail.com for a full, updated listing. See you on the dance floor!