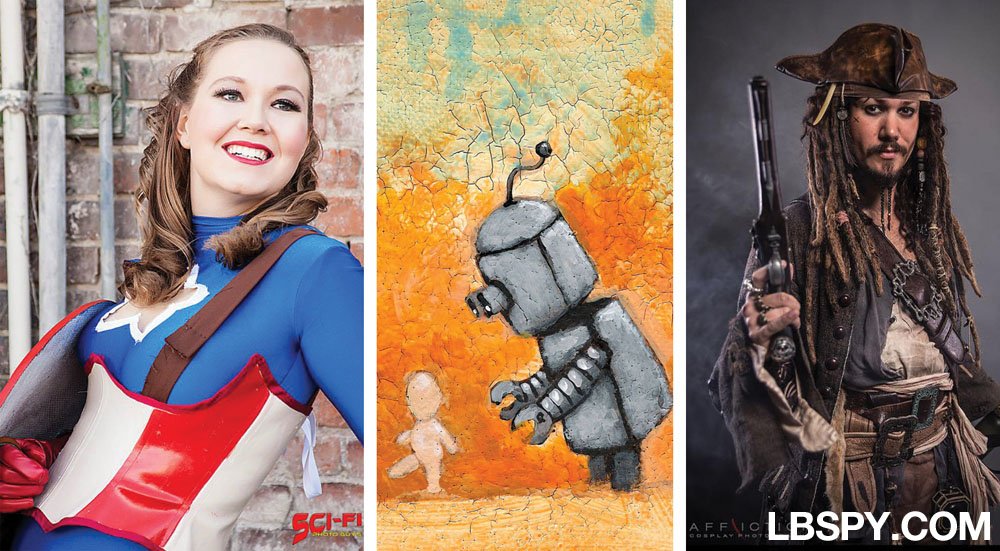 Grab your wands, don your capes, and swoosh into Con of the Mountain on Saturday, April 18th! You will embrace your inner geek of fantastical creatures and caped crusaders at Clifton Forge’s Library’s first annual Comic and Gaming Convention. The lineup includes special guests: Brian Korte, Frank Mentzer, Steve Long and artist guest of honor, Craig Snodgrass. There will be workshops, gaming, magic the gathering, Yu-Gi-Oh, tournaments, an art show, vendors, cosplay contests, kids activities, and more. It’s also encouraged that you show up in costume! Admission is free and the event runs from 10am-10pm.

Help build a 25,000 piece Lego mosaic with master brick artist, Brian Korte. In 2007, his Lego building company, Brickworkz, was commissioned to design a Guinness World Record-breaking Lego mosaic, the “Largest Lego image” in the world. The piece was more than 44 ft long x 22 ft high, and contained more than 1,200,000 LEGO parts. In 2009, Korte was honored to receive the Theresa Pollak Award for creativity in the Applied Arts. He was a nominee for the MUSE awards, a peer-judged honor for creative business ventures in Virginia. He currently serves the Richmond community as an adjunct professor teaching Lego art camp classes for children at the Virginia Museum of Fine Arts. His clients include Johnson & Johnson, Chick-Fil-A, The New York Times Magazine, Capital One, and Anhesuer-Busch. Learn more at brickworkz.com.

Game with legendary game designer, Frank Mentzer. He is an Old School gamer best known for writing five D&D rule sets (Basic, Expert, Companion, Masters, and Immortals) and other D&D products with his friend and co-author Gary Gygax. In 1980, he won the title of #1 Dungeon Master and in 1993 he won an Origins Award for GameMaster Secrets II.

Get to know guest of honor, Craig Snodgrass, during his robot-painting demo! If you are unfamiliar with Snodgrass, he does phenomenal paintings and illustrations of robots (featured pic), rocket ships, ray guns, space girls, and other science fiction themes. He considers his work to be a little bit Stan Lee and little bit Dr. Seuss. To check him out, visit craigsnodgrassart.com

Several cosplayers will also be in attendance to take photos and entertain you including Mikomi Chan (pictured), Snow White, Hawke, Pirate Jack (pictured), and Redbeard the Pick. If you don’t know what a cosplayer is, it’s costume enthusiasts. If you go to a convention and you are NOT in costume, you are the minority. In case you need some guidance on dress up, there will be a workshop on how to costume on the cheap!

Cosplay Inc is bringing their replica Scooby Doo Mystery Machine van and and Jurassic Park tour vehicle. You’ll get to fully immerse yourself with photos while meeting the characters from both worlds.

So if you’re a geek and a kid, and you know there’s a little of both in us all, don’t miss this event! While it’s free to attend, everyone must register at conofthemountain.com. The library is located at 518 Church St in Clifton Forge, VA. This event is a literacy outreach program geared to encourage reading though the use of comics, gaming, and other out of the methodologies.