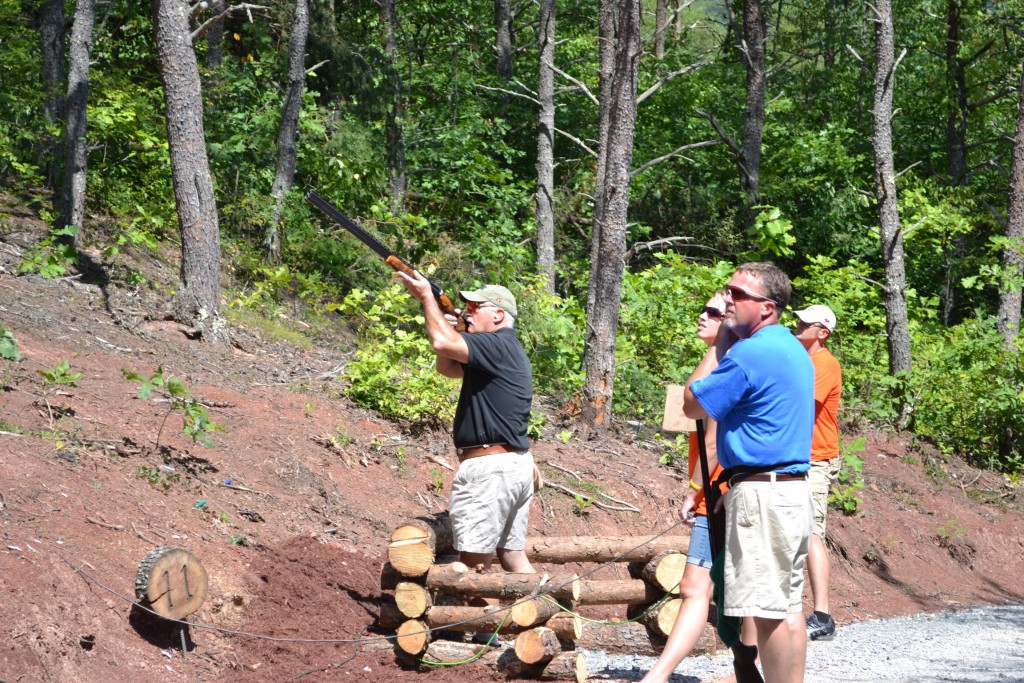 It’s time to break clay at the 2nd Annual Greenbrier Valley Shotgun Challenge held Saturday, March 28th at the Powder Ridge Sporting Clays and Greenbrier Gun Club. Clay pigeons that is, round biodegradable targets that are launched through the sky at blinding speeds, only to meet their demise by the true aim of a steady hand and keen eye.

If you are unfamiliar with this pastime, clay pigeon shooting is often described as “golf with a shotgun”. A typical course includes 10 to 15 different shooting stations, laid out over natural terrain. While the two sports share some similarities, one of the major differences between clay pigeons and golf exists in the fact that clay pigeons, unlike golf holes, are constantly moving.

There are three (3) major disciples of competitive clay pigeon shooting: skeet, trap, and sporting clays. Skeet shooting is a recreational and competitive activity where participants use shotguns to break clay disks mechanically flung into the air from two fixed stations at high speed from a variety of angles. Trap shooting is when the targets are launched from a single machine away from the shooter in random direction.

Sporting clays are different stations set on a walking course, with each station having at least two trap machines, with different presentations from each machine. Unlike trap and skeet, which are games of repeatable target presentations, sporting clays simulates the unpredictability of live-quarry shooting, offering a great variety of trajectories, angles, speeds, elevations, distances, and target sizes.

Participants will compete in two different shooting locations: Powder Ridge Sporting Clays and the Greenbrier Gun Club. Event organizers will set times for each. Powder Ridge is located in Caldwell, behind L&S Pistol Range. The Greenbrier Gun Club is situted on Kates Mountain, just past the new Avicare complex. Please note: participants will need to provide their own transportation between the two shooting locations.

There will be a 50 Round Sporting Clays where the contenders will shoot a total of 50 clays from 6 different stations. There will also be an interestingly titled 25 round Hillbilly 5-Stand. Shooters will have 5 different stations to try their luck from, with each station offering 5 shooting clays. Powder Ridge is calling this a Hillbilly 5-stand because the shooting stations will consist of a jon boat, duck blind, outhouse, and deer blind. It’s safe but fun.

The winner receives 50% payback. 2nd place is 30% and 3rd place is 20%. The number of participants determines pay back. The more people who enter, the higher the winning payouts. $10 of each entry fee goes towards the payback. In 2013, there were 33 shooters. This year the event will be held in late March. Moved further into March verses last year, the later start in the month is expected to more than double this year’s attendance.

Registration is $90, with this fee not including a gun or shells. Participants must bring their own gun (B.Y.O.G.), and while Powder Ridge may provide some ammunition, it is encouraged all participants bring their own. The event is open to the public, with contestants limited to ages 14 and above.

Powder Ridge is locally owned/operated by Blaine Phillips of Lewisburg, Steve Whited of Frankford, Greg McCullough of White Sulphur, and Jordan Duncan of Caldwell. Each of these owners have a strong passion for sports. Throughout the years, they have all been competitive athletes in fields such as football, baseball, soccer, and racing. When we asked Blaine how this venture was inspired, he told us that about 7 years ago, he was introduced to a shotgun competition and saw it as a sport he could continue well into his senior years.

Blaine and the owners also see this business as a benefit for area youth. Using a combination of education and athletics, students learn valuable skills of teamwork, leadership, and safe firearm handling. They are provided a supportive environment where shooting serves as a catalyst for teaching life lessons and skills that emphasize positive character traits and societal values.

Last year this event attracted shooters from Washington DC, Charlottesville, Richmond, Charleston, and Huntington. If you plan to visit, lodging accommodations are recommended at The Greenbrier, General Lewis Inn, Holiday Inn, Hampton Inn, and Fairfield Inn. While you’re here, enjoy all the Greenbrier Valley has to offer including dining, shopping, the Greenbrier River trail, Salt Cave Spa, and golf.

Powder Ridge is certified member of the National Sporting Clays Association. Other 2015 events include a tournament in April and the West Virginia State Championship in August. To register for this event or for more information, call 304-667-7730 and/or visit the Powder Ridge online at facebook