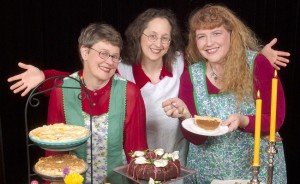 Potluck is a feast of stories, songs, and poems that will satisfy your soul, lift your heart, and tickle your funny bone. Karen Vuranch, Julie Adams, and Colleen Anderson have gathered their very best and very favorite pieces about cookery and community—and the connections between them—into an hour-long live performance that’s full to the brim with laughter and love. Their show is scheduled for Friday, April 10th at the Pocahontas Opera House in Marlinton, WV. Showtime is 7:30pm and admission is $10.

Karen Vuranch, who has been called West Virginia’s First Lady of Storytelling, tours throughout the U.S. and internationally. She is well-known for her Appalachian and multi-cultural stories, as well as for her one-women plays, Coal Camp Memories and Homefront. Her living history performances include author Pearl S. Buck, labor organizer Mother Jones, and humanitarian Clara Barton.

Julie Adams is a singer/songwriter and, since 1983, featured vocalist for the internationally syndicated public radio show Mountain Stage, which is heard across the US and on Voice of America. She has performed with Kathy Mattea, Sarah McLachlan, Bruce Cockburn, Shawn Colvin, and many others. She has released five CDs, most recently Christmas Angel and Julie Adams and the Mountain Stage Band: Live, Volumes I and II.

Colleen Anderson is a writer, designer, and songwriter whose work has been published by Redbook and Arts & Letters, among others. Her songs have been featured on Mountain Stage and The Folk Sampler, and she has released two collections, Fabulous Realities and Going Over Home. With Julie Adams, she leads an annual songwriting workshop, Sources of Song, at Ghost Ranch in New Mexico. Colleen owns and operates Mother Wit Writing and Design, a creative studio in Charleston.

The Opera House is located on 818 Third Ave in Marlinton, WV. For more info, visit: PocahontasOperaHouse.org