SOUND OF THE TOWN: EILEEN KRAMER – 100 YEARS OF DANCING W/ THE WIND. BY SUSANNA ROBINSON-KENGA 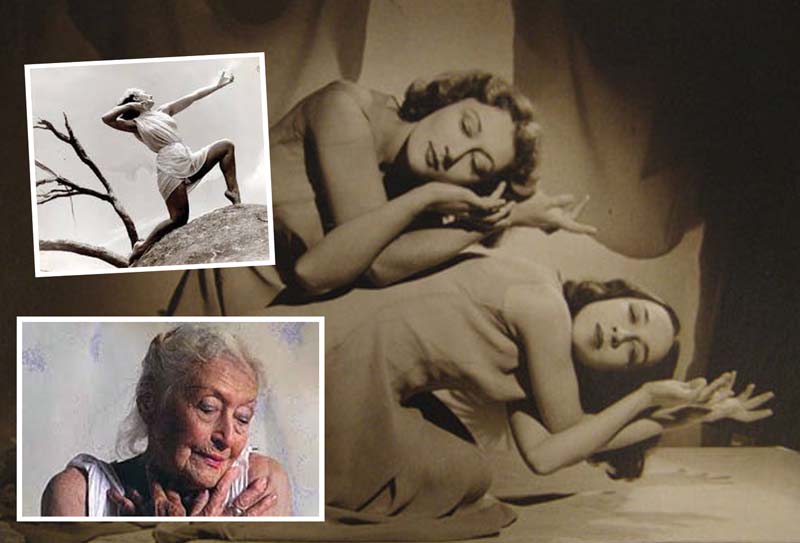 One hundred years on this earth. 1914 was the year of Eileen Kramer’s birth. And still she moves gracefully though her days, now back again in her native Australia. 1914, a year so far beyond what we can fathom to have come into existence that I could scarcely imagine what the world was like, what it knew, what was yet to come, and how far we’ve come in this century of her presence. 1914: the first traffic light. The last know passenger pigeon dies in the Cincinnati Zoo. Charlie Chaplin invents the Little Tramp. And Eileen joined the parade.

Most of us who know Eileen Kramer have a memorable first meeting. For my old buddy, saxophone player, the late AL JETER, it was this. He was supposed to meet her at an art gallery in New York to transport her to West Virginia many years ago. When he asked her how he would know her, she simply said (to be read in Eileen’s voice), “Oh I’ll be wearing a red cape and doing pirouettes.” And she was.

My first meeting with her was many, many years ago in the restroom of Carnegie Hall, during a performance intermission. This was well before the renovations when the waiting area was quite small. She was dressed in full regalia, and she was wearing the most divine rhinestone earrings I’d ever seen, the old kind, the gray-ish kind, heavy and incredible. I asked of this lovely being, “Where on earth did you acquire those gorgeous earrings,” to which she replied, “Oh, my dear, they were once given to me by a hooker who was down on her luck.” I was in love. We became friends at that moment and carried in through many years of tea and visits and costume collaborations.

The author of several books, Eileen asked me to write the jacket notes for her autobiography Walkabout Dancer, published in WALKABOUT DANCER 2008. (Yes, she wrote several books well into her 90’s). Here’s what I wrote, after much critiquing , and under her watchful eye.

“Eileen Kramer’s journey of self-realization as a creative artist from the magical world of the bush land of Australia to the intellectual and intuitive world of modern dance: Eileen Kramer spent her childhood listening to the kookaburras and sailing along the coast of Australia. Dwelling on this island continent, it was not surprising that the rest of the world rarely visibly manifested itself through the window of Eileen’s existence. A creative, magical spirit from the beginning, young Eileen left school at an early age, finding a course that enabled her to go her own way.

Eileen’s life was changed in 1939 when she attended a performance of the Bodenwieser Dance Company in Sydney, opening the door for her world travels and her remarkable journey through life. The dance company taught its dancers more than just dance. Through Madame Bodenwieser, Eileen absorbed European culture – appreciation of music, art, architecture, politics – in other words, the dance company brought about a life-changing way of thinking.

Eileen’s journeys to India, Australia, Paris and the United States have influenced her dances and have blended a wonderful intermingling of styles. She carries with her a spiritual “dilly bag” filled with ideas and images she has gathered from her world travels. Lyrical, expressive, and always creatively imaginative, Eileen Kramer’s choreography, costumes, and philosophy have proven an inspiration to all those around her. This lovely book chronicles Eileen’s life with tales of her travels, experiences, and escapades, as we watch her dancing lightly through the years.”

And so she landed in Lewisburg, became a star costumer and choreographer in the Trillium Performing Arts Collective, wrote books, fell in love, still traveled, painted and dreamed, and walked around town like some kind of white angel. Her conversations were interspersed with such lovely things as, “On the veranda we could hear the cries of and see the silhouettes of many many peacocks…” or “On Tuesdays in Paris, we would wear hats…” and the quotes go on and on, and must only be recalled in her distinctive voice. Her phone messages always began with, “This is Eileen”, as if for a moment you wouldn’t instantly know who it was. And then when she was done, she would have up with barely a goodbye, often just an “Alright, then” and she’d be gone like the ephemeral entity she was and is.

When I made my collaged calendars, she enjoyed having her image included, and I embraced that, so exotic was the aura of her beauty. After a couple of calendars, I was invited to go thru the treasure trove of her photographs from her incredible world travels, costumed in everything from ornate masks to nearly nothing, and she allowed me to take them and scan them if I returned them unscathed. I was honored to be trusted to do so! She’s still all over my artwork and my costuming inspiration. In the Basic Shapes costuming book she gave me, she wrote in her swirly script “To my comrade in costuming”. I was in good company.

Several years ago, most of you will remember when a car driven by a drunken driver ran head-on into her little cottage, knocking her staircase away from the wall and trapping her upstairs. She was rescued by a large, muscular fireman, on whose knee she sat waiting, and to whom she said in a little bitty voice, “Oh, am I hurting you?” When the headline was in the local paper, it said “92-year-old Woman Rescued”. She told me she wasn’t happy with the headline, and I thought perhaps it was because it revealed her age, of which we were still speculating. She said, “No, it should have said ‘92-year-old DANCER’!”

At 97, she decided she needed a Facebook account, and we all enjoyed her posts immensely. At 99, she starred in a video by Australian musician Lacey Cole, whose composition “Nephilim’s Lament” features Eileen dancing , as beautifully as ever, on the beach with the tempestuous sky behind her, the ocean wild and free, her costume whipping all around her while she dances with the wind. I can hardly watch it without getting chills when it shows her graceful hands with the sky as background, the endless sea reaching across her world, our Eileen showing us what 100 can be. Watch this and you’ll get it. http://www.youtube.com/watch?v=UvjTiOwCNAs

When she chose to venture back to Sydney a year or so ago, we knew we would miss her. Many of us said our goodbyes at the airport, wearing costumes she had made or that were inspired by her. So she traveled effortlessly across the globe and said to us later, “Oh it was a breeze! Two nice gentlemen looked after me.” I bet they have tales to tell! And here I am, needing a nap if I go to the post office AND the bank in the same day. At 99, she skates across the world and calls it “a breeze”. Two weeks before we had attended her amazing yardsale, where I acquired the shawl which I wear every day, all fuzzy blue and green Scottish wool, the origins of which remain a mystery, other than the story she told from end to beginning, a tale she wove which ended with, “So, I was going out in need of a postage stamp,” to some kind of wild boat adventure in search of the Loch Ness monster. I still call it my postage-stamp-Loch Ness-monster-shawl, and it draws attention everywhere I wear it, so uniquely is it rendered by the hands of our amazing friend.

The recent Trillium Performing Arts concert was a tribute to Eileen. Each of the major contributors rose to the please the muse, and it was honestly the best I’d seen from Trillium for a long time, mostly because it was SO about Eileen. There were two segments that touched me deeply, so I’ll write about those. One was by Chally Erb, and it was an experimental technique using only shadows, silhouettes, and light. A long white curtain was tautly draped across the stage, and the shadows of all things Australia were fashioned to make a beautiful love letter to Eileen. This was mesmerizing, with the shadows so perfectly formed on the whiteness that you could see even the details of the lace on the costumes without seeing anything but the shapes of the people. It was so well-done, and it encompassed Eileen’s history and the history of her native homeland, from indigenous didgeridoos to children dancing, from magic to mayhem, and every bit of it a love letter.

The other one that spoke to my heart was Jo’s tribute, which began with her having tea with the empty chair where Eileen always sat, in reality her cats and papers all around, her lovely clutter and her lovely stories intertwined. This was an homage to both Eileen and the lovely natural fabrics she often chooses (which she often paired with the sparkliest, blingiest lames and wildly sequined poly-somethings of unknown origin), costumes rendered lovingly with the tiniest gold stitches, all by hand. This piece showed the journey from the earliest forms of the fabrics to the destination of the making of the final costume, in this case a red dress that almost had Eileen still in it, especially when the shadow man swept her up into his arms and waltzed her around the stage…Ohhh, it touched me deeply and unexpectedly.

Our Eileen Kramer. The first hundred years. I’m sending love to her across the world, on the wind, on the ocean, in dreams and memories. My comrade in costuming… I miss her.