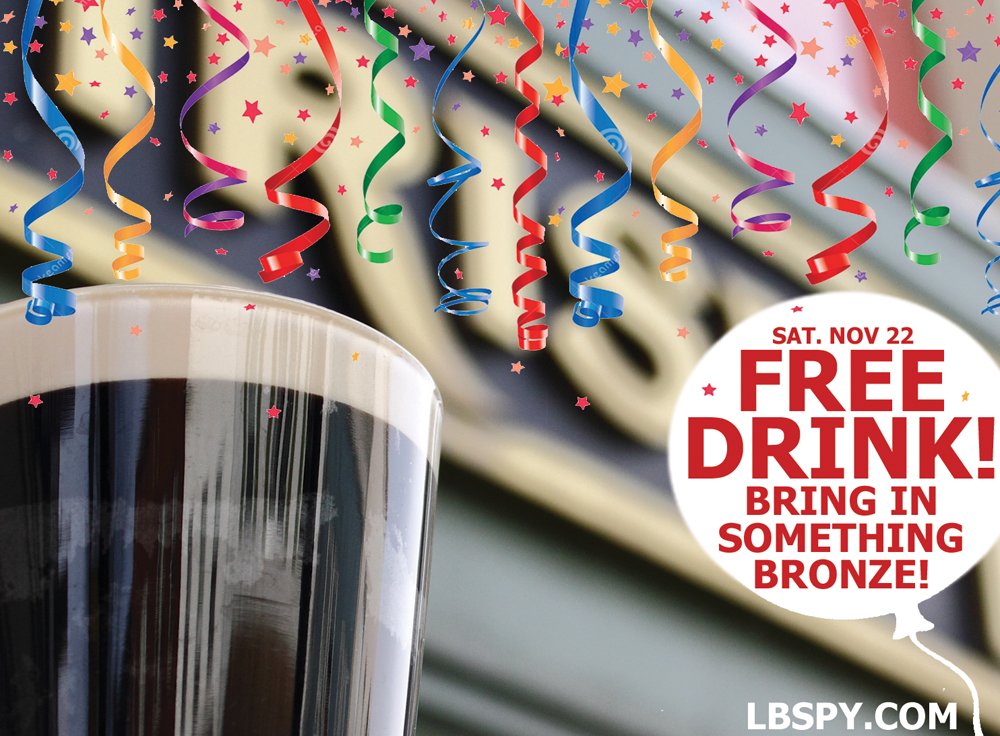 You’re invited to celebrate 8 fantastic years at the Irish Pub in downtown Lewisburg on Saturday, November 22nd. Recently rated “Top 100 Bars in the South” by Southern Living Magazine, the pub has made a mark and is ready to rejoice with patrons, family, and friends. There will be live music by Patrick O’Flaherty from 3-9:30pm, birthday cake cutting at 8pm (cake provided by Greenbrier Valley Baking Company, see pg 2), and late night partying w/ DJ Blaw Knox and Blurry Vision starting at 10pm.

Since the pub is now celebrating its 8th year, gift them something bronze and you will get a free drink! Bronze, which became very popular in the third millennium B.C. is the 8 year anniversary gift. If you are not familiar with bronze, it’s an alloy that’s made up of about 90% copper and 10% tin. Some common things made of bronze are bearings, electrical connecters, springs, trophies, and clips. Depending on what you bring in, you may be lucky enough to have it placed behind the bar.

While the 8 year anniversary is a major event for November, the Pub will stay busy throughout the month. On First Friday, November 7th, the pub will host a Potato Drive, also referred to as “The Great Potato Drop” from 3-9pm followed by a concert by the Rivertown Gypsies at 9pm. You are encouraged to bring in a 5lb or 10lb bag of potatoes to help feed the needy and homeless in Greenbrier County. To reciprocate your selfless contribution, you will get a free drink made with potato vodka. The Pub is working with Wellspring of Greenbrier, Inc for this drive.

Just two days later, on Sunday the 9th, Battlefield Band will hit the stage for a free concert at 5pm. With their brand of traditional Scottish music, you will feel inspired by their rich heritage of ancient and contemporary sounds. Currently on tour in the United States, the group’s performances combine open tuned lead accompanied by guitar, keyboard, and accordion. The band regularly performs in Germany, United States, Switzerland, France, and England. Their current tour has them traveling through New Hampshire, DC, Delaware, Maryland, Virginia, and Connecticut performing at the town of Sandyhook’s Suzuki Music School`.

‘…as fresh as new mown hay…their live show was a revelation, their new album is a keeper’ – Irish Music Magazine, May/June 2013 (Review on Battlefield Bands)

On Thursday the 20th, country music artist, Mark Kline will perform at 7pm. The pub also has weekly events, including Pub Quiz every Tuesday night at 8pm and Whiskey Wednesday. Whiskey Wednesday offers whiskey specials and hosts various local music acts, including: Jim Snyder on Nov 5th, John Foster on the 12th, Dan Freeman on the 19th, Mike Donahue on the 26th, and Josh Baldwin on Dec. 3rd.

Don’t miss out on all the fun happenings at one of the top 100 bars in the South. You’ll enjoy great drinks, good company, and quality entertainment almost nightly with traveling musicians, local performers, or Patrick O’Flaherty playing traditional Celtic on the stage every Thursday-Monday. The pub is located at 109 E. Washington Street. For more information, turn the page.