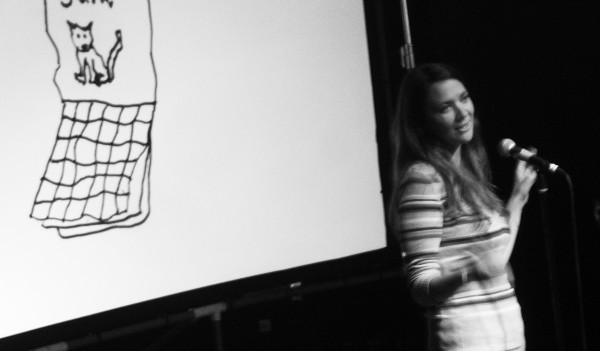 Story-teller, stand-up comedian Grayson Morris will be gracing the stage at The Spring on Thursday, August 14th at 9pm. Morris is known to captivate audiences with her hilarious anecdotes and sassy social critique. She delivers smart comedy and her stories are punctuated by her special brand of “nice guy humor.”

A regular in the Asheville comedy scene, Morris has performed in the Laugh your Asheville Off Comedy Festival, The Laughing Devil Comedy Fest in NYC, and the Great American Comedy Festival in Nebraska. She has opened for Fairly Legal actor Baron Vaughn, Tom Segura who covers a host of topics including his many flaws and the absurd behavior of people in his life, his many flaws, and popular stand-up comedian Joe Zimmerman who with “the combination of [his] calming vocalization and inventive writing is a thing of magic. You’d be hard-pressed to find a more enjoyable show.” – Buzzfeed. Morris has also opened for comedian/writer Sean O’Connor. O’Connor has been featured doing stand-up on Conan O’Brian and has written for a variety of television shows/award shows including MTV’s Video Music Awards and Norm Macdonald’s The Sports Show.

With an act that isn’t ripped from the headlines, but almost entirely from her own life, Morris has a lighthearted way of telling stories about the calamities of personal life – whether it’s dating, shopping at Victoria’s Secret or the stress of trying on new underwear ( a bit that really got the crowd laughing tonight). Morris’ personality onstage is fun and lively, the polar opposite of negative.

Offstage you may find she’s a bit more serious, but when she talks about comedy Morris quickly lights up, losing that seriousness under the weight of an infectious smile. In an interview with Star News Online, she said her launch into comedy surprised many around her but she confesses she’s always been into telling funny stories. Now she mines her own life, and occasionally her friends’, for comedy bits far removed from the expected routines built around quick one-liners. You will find Morris to be an excellent storyteller onstage.

Don’t miss this show at The Spring. There will be puppetry, stories, and sassy stand up by this talented performer. There will also be a Joke Contest!

Community Nights in August will be held every other Wednesday starting with the 6th at 7:30pm. There will be a free documentary film screening on “One Day on Earth,” a film composed of footage shot in a 24 hour period in every country on the globe (movie at 8:30pm). Chalkboard Pictionary Night is held on the 20th at 7:30pm. On both nights, craft beer pitchers are just $10.