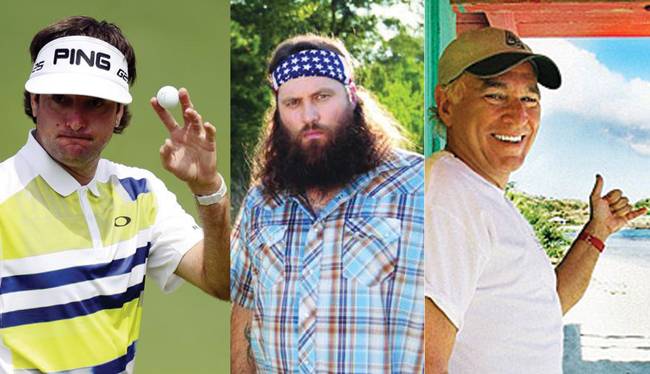 Now can you take the quiet sport of golf and spice it up a bit? Throw in a couple of bayou-dwelling, bearded creatures, add an astronomical amount of fireworks, blend it like one of Jimmy Buffett’s margaritas, and serve it up right next to the coolest small town in America. The result: the Greenbrier Classic at one of the most beautiful resorts in the country.

So what’s in store for the official PGA Tour event this year? The Greenbrier Classic will kick off on June 30th with a 5K run and practice rounds and will continue until the final round of competition on July 6. Big names from all corners of the celebrity kingdom will grace The Old White TPC Golf Course this year, ranging from television stars to golf legends. Bringing a little southern style to the playing field is the dynamic duo from A&E’s hit television show “Duck Dynasty”. The bearded brothers, Willie and Jase Robertson, will accompany the owner of The Greenbrier, Jim Justice, and professional golfer Bubba Watson in a group that will partake in the Classic’s Pro-Am on July 2nd. Golf enthusiasts will also have the pleasure of watching Watson compete in the tournament for a 6.5 million dollar purse beginning on July 3rd. Other notable players to compete on the course include 2014 U.S. Ryder Cup Captain Tom Watson, 2012 U.S. Open champion Webb Simpson, and six-time major championship winner Sir Nick Faldo.

For the music lovers and the individuals that need an outlet after restraining their noise level all day during the quiet spectating of the golf tournament, The Greenbrier Classic will also play host to a concert series to amp up the weekend. Girls will swoon and fans will sway to the voice of Adam Levine as he sings with his pop sensation band, Maroon 5, on July 4th. Not only will the band light up the stage on Independence Day, but fireworks will light up the sky as well in a spectacular display. And pack your bags on July 5th, because while the concert series isn’t exactly set on a beach, Jimmy Buffett will surely take you there… or to Margaritaville…. or wherever your happy place is when you hear his music.

Let’s top off this fine blend of events with something even sweeter. As if the golf tournament and concert series weren’t enough to compel you to buy tickets for this year’s Greenbrier Classic, then perhaps the words “free giveaways” might entice you. This year, a Ford vehicle will be given away during each competition round. Not only could you possibly roll out with a new pair of wheels, but you could also walk out with a good chunk of change in your pocket. Spectators in the bleachers and lawn area on the 18th hole will get a cash payout for each hole-in-one made during the Pro-Am or official competition rounds. To sweeten the pot (the jackpot, that is), the amount will increase with each hole-in-one made and could reach up to $1,000 per person.

Whether you’re an avid golf fan or just a curious spectator, the 2014 Greenbrier Classic has something to offer for everyone, so check it out and don’t forget to purchase your tickets today!

For more information, check out the website at greenbrierclassic.com