RAMBLIN: SWEETEST TIME OF THE YEAR. BY JENNIFER SPROUSE 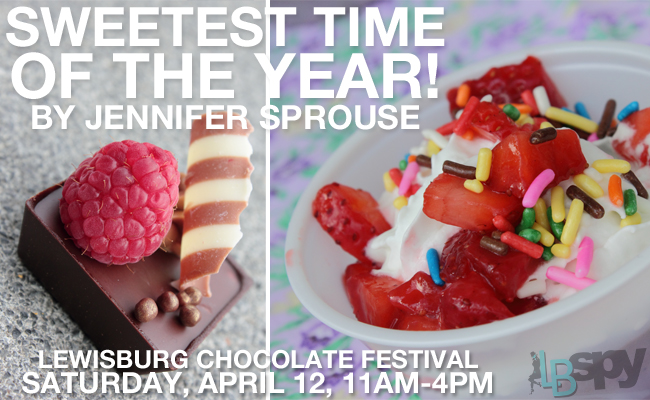 A obscure oblong pod and a curious soul that cracked it open- that’s all it took to start the craze that gripped the world and left us human beings so desirous that we have since been unable to shake it. From its ancient beginnings as a frothy, bitter brew to the later production of chocolate bars, the cacao fruit (namely its seeds) has been revered in a multitude of ways and has proven itself timeless. In ancient Mesoamerican civilizations, it was used as an elixir and was regarded with such value that it became a form of currency. In Europe, sugar or honey was added to the naturally bitter drink to sweeten it, which propelled its appeal to a whole new level and inspired much of the experimentation that led to chocolate as we know it today. Entire festivals are even dedicated to celebrating its very existence, and the Lewisburg Chocolate Festival is a shining example.

On April 12th, chocolate will ooze from every corner town and beckon for everyone to come tickle their taste buds. Restaurants will feature special chocolate themed dinners and desserts, both savory and sweet, and area groups and businesses will offer their own creative, chocolaty treats for all to try. So go ahead and have a taste… or twenty! If you need help justifying your gluttonous desires, feel free to use any one of the following excuses:

“It’s only once a year.”
“If the ancient Mesoamericans could self-medicate with chocolate remedies, then so can I.”
“I’ll run the HospiceCare 10K Chocolate Chase beforehand to counteract the astronomical amount of goodies that I’m about to eat.”
“They don’t call it ‘the food of the gods’ for nothing!”
Or my favorite and the most simply put…
“Why not?”

So now that you’ve validated your love for chocolate, I encourage you to take full advantage of the festivities. Start your day off with the Chocolate Brunch at the Greenbrier County Public Library; eat your way to the championship in the chocolate mousse eating contest next to Del Sol; purchase tasting tickets and sample your way through town at over 30 chocolate tasting stations. There’s a flavor for every palate, from The Livery’s chocolate molten lava cake with crème fraiche to Washington Street Gallery’s Bad Ass Beer Brittles made by Stacy’s Sweet Spot. You can even learn how to satisfy your sweet tooth at home by watching one of the pastry chef demonstrations at either City National Bank or the Greenbrier County Convention and Visitors Bureau.

When you start to feel full from feeding your stomach, take a break and feed your brain; head to the North House Museum and learn the fascinating history of chocolate by embarking on their self-guided tour. Or if you start to feel that you can no longer walk from over-eating, just roll yourself on down to the Lewis Theatre to watch a free screening of “Willy Wonka and the Chocolate Factory”. The festival will also feature live performances, a bake-off, story-telling, and so much more, so be sure to indulge in every aspect that it has to offer.

All in all, the Lewisburg Chocolate Festival is not only a celebration of gustatory delights; most importantly it is the celebration of an item that brings people together. From ancient gatherings and rituals to modern get-togethers around a bonfire, the cacao fruit in its many forms has been present in our traditions for thousands of years. From pulp to seed, inside and out, this unassuming fruit has been the catalyst for some of the most amazing and coveted food fares, fads, and inventions. What better way to honor this beloved treat than to keep the traditions strong and to pay tribute at the 2014 Lewisburg Chocolate Festival? Eat on, my friends!