GOOD EATS: SCHOOLED IN CHOCOLATE. BY COY A. FLOWERS 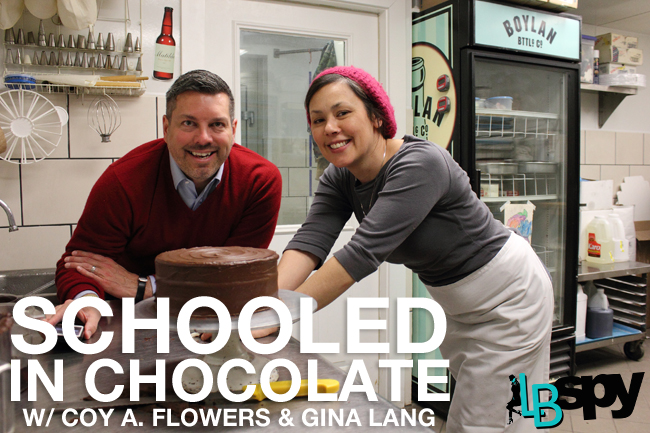 At heart, I’m a perpetual student. If I could grab a backpack and head to class every day while providing for my family, I would be deeply happy to spend my days soaking up new and exciting information.

So, when Gina Lang at the Greenbrier Valley Baking Company, or GVBC, agreed to open her kitchen to conduct a private baking class for me, I was all in for this month’s food adventure, especially when I learned the focus of her instruction – Chocolate!

Outfitted in a very French pink beret and starched white apron, Professor Lang instantly matched my mental vision of the quintessential pastry chef. But when she pushed up her sleeves to begin the lesson, revealing her super cool tattoos, I was certain of one thing: the next hour sure wouldn’t be my grandmother’s cake baking session.

And, yes, it’s a torte, not a cake. A traditional cake is made with ingredients mainly consisting of sugar, eggs, butter and flour. A traditional torte, however, calls for little flour and the use of ground nuts or breadcrumbs in its place. This change of ingredients causes the torte to be much heavier in both texture and taste. At GVBC, Gina achieves a more dense cake by utilizing solid shortening instead of oil.

In European countries, desserts are created with care and precision. Gina’s tortes made here in the Greenbrier Valley are no exception to that rule. Starting with exquisite cocoa then adding in specific amounts of milk, flour, baking powder, shortening, and eggs, she creates an amazingly rich cake, weighing nearly 2 1/2 pounds, as the core of her dessert.

After the cake had properly cooled and was carefully removed from the pan, Gina proudly unveiled two of her most prized kitchen tools: her personal knife for slicing the cake into layers and an antique cake wheel that she originally found in a barn outside of Frankford. Watching her cut the cake into three nearly equal round layers was fascinating. From my vantage point of kneeling to be eye level with the cake, I spied an interesting combination of new meets old. A tattooed female forearm, wielding a saber-like knife, expertly slaying a traditional yet modernized cake, while resting on an antique pedestal. I felt as if generations of cake aficionados were meeting at that one moment, and I was truly lucky to be witnessing their collective work.

To make the cake more moist, yet maintain it’s dense consistency, Gina revealed one of her secrets. She brushes each layer of the cake with a simple sugar (3 parts sugar to 1 part water) mixed with vanilla. “Vanilla,” she added, “is like salt. It brings out the intensity of the flavor of the chocolate.” From the mouth-watering aroma of the yet unfinished torte, I was an instant believer.

Now, I must admit, my favorite part of the lesson happened next: fudge icing. A torte is typically made of many layers. The filling is generally made up of whipped cream, buttercream, or mousse. In a pinch, I would be satisfied with any of those three. But, between you and me, I much prefer a bowl of thick, chocolatey fudge and a large spoon – and the guarantee than no one would discover my gluttony. As if she were also part clairvoyant, Gina did not disappoint, smacking my palate with an mind blowing chocolate fudge. Consisting of a most incredibly perfect blend of butter, cocoa powder, water, corn syrup and salt, this is the fudge icing I’ve been waiting for my entire life.

Once completely covered in icing, the torte was ready for its finishing aesthetic touches to transform it from a more rustic dessert to a refined delicacy. Applying a steady spin on her cake wheel, Gina expertly utilized an 8-inch icing knife to smooth and swirl the fudge icing into a regal torte, fit for both European royalty and my Greenbrier Valley 3rd grader.

This and countless other Chocolate Fudge Tortes from Gina’s kitchen will be eagerly consumed, thoroughly enjoyed and fondly remembered for the decades to come. I’m just glad that I got to spend time on this occasion in the kitchen of a local expert doing what she loves to do and others are grateful that she’s doing it.

Visit Gina and the Greenbrier Valley Baking Company at 110 South Jefferson Street. You can also call to order a torte or other wonderful dessert at 304-645-6159. Enjoy!