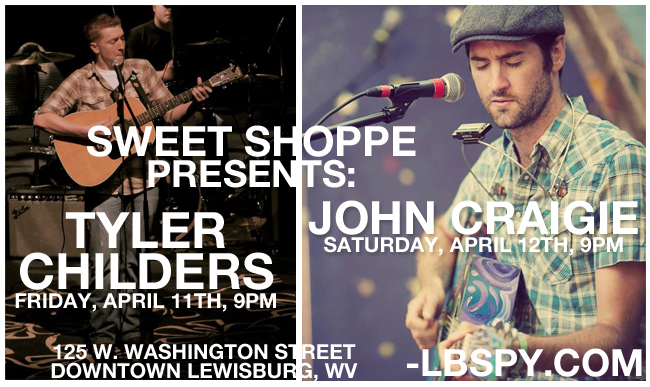 On the weekend of Lewisburg Chocolate Festival, the Sweet Shoppe in downtown Lewisburg will welcome 2 touring musicians by the names of Tyler Childers and John Craigie. Childers’ show is scheduled for Friday, April 11th at 9pm. Craigie’s performance is the following night, Saturday, April 12th at 9pm.

A native of the Kentucky Appalachian Mountains, in a small town called Paintsville, Tyler Childers grew up in an economy dependent on the dying coal industry and where music thrives. Paintsville is located in the Big Sandy River Valley of Johnson County in Eastern Kentucky made famous for its lawlessness, religion, and booze, and a song about a horse thief, a rambling man, and an attempt to gain some good ol’ Appalachian self-justice is what “William Hill” is all about. Following his “Papaw” around to the Kentucky social institutions – church events and barber shops to name a few– as well as a lot of coon hunting with his dad, Tyler has heard a tale or two about the misadventures of a few good ol’ boys and he gives his own spin of these accounts behind a whisky-soaked voice well beyond his age of 22.

OH MY GOSH, Tyler Childers is hitting KY, WV, and TN – including Nashville! Y’all are in for a real treat. – Michelle Evans.

Childers’ album “Bottle & Bibles” has been out for about three years and then an EP featuring songs “Dead Man’s Curve,” “Shake the Frost,” “Charleston Girl,” and “White House Road.” Listen now at tylerchilders.bandcamp.com. He’s now in the process of releasing a new album this summer 2014.

He has recently moved to Greenbrier County, West Virginia so you may be in for a treat to see him perform at various venues while home from touring the road.

For the past 10 years, folk-singer, songwriter, and storyteller, John Craigie has continuously toured the United States and internationally. He carries timeless melodies and insightful lyrics, interspersed with witty storytelling. His songs take many poetic turns before bringing listeners back home. His themes range from social commentary to personal empowerment, political satire, and modern love. He’s released seven albums, his latest titled October is the Kindest Month.

He has traveled around the world, having played in all 50 states and beyond, bringing his music to nearly every corner of the planet. His fans span generations, political ideologies and geographic locations, but they are all charmed by the dynamic yet humble troubadour peering out from under his signature cap.

Craigies’ eighth studio album “The Apocalypse is Over” is available now. It features the songs “Innocent in My Arms,” “Free Drinks for Everyone,” “We Ain’t Leaving This Bar, Patrick,” and many others. You can order it from CD Baby and iTunes. Find more info on John Craigie on wikipedia.

Get out the weekend of April 11th and 12th and head to the Sweet Shoppe for great original music. You won’t be dissapointed. Tell ‘em LBSPY sent ya!