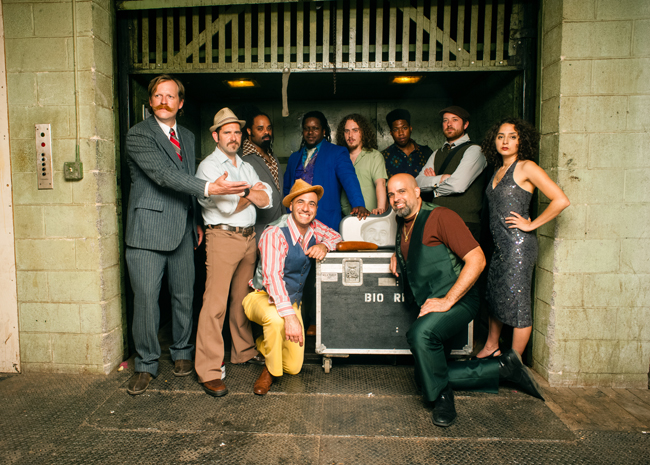 Lewisburg is quickly turning into the newest salsa destination as Bio Ritmo will be performing at The Spring on March 1st, 9pm. The door charge includes a free salsa lesson! Admission is $15 in advance, $18 at the door.

‘There is some grass, and then a trailer, and that’s my house,’ Marlysse Simmons says to me just before we exit Cafe Subrosa in Richmond, Virginia. I spend the next 10 minutes driving up and down her block looking for the mobile home on a grassy knoll I picture her living in. Finally, she comes out of her house and stands next to a small hitchable cart parked on the grass strip between the sidewalk and the curb clutching a pile of her bands recordings. Right… that’s the trailer.

Earlier that morning, Marlysse and I drank a cup of tea together, and shared a homemade croissant while we talked about her band Bio Ritmo’s upcoming concert at The Spring in Lewisburg, March 1. She describes the bands music as ‘Indie Salsa’ a mix of classic latin salsa rhythms, funk, and ‘Richmond’. Having grown up in Richmond, I instantly understand.

Marlysse grew up in D.C. Her mother is Chilean, and her father is American. She was classically trained on the piano as a child, but fell in love with latin music as an adult. She left D.C., and moved to Richmond 12 years ago to join Bio Ritmo. Since joining the band, she has become the booking agent, tour coordinator, and self proclaimed ‘band mother.’ In addition to piano, the band features a 4 person horn section, and 3 person percussion line and of course, those traditional soaring latin vocals by tenor Rei Alvarez. The band has toured all over the U.S. and Europe, and recently appeared on ‘The Rough Guide to Salsa,’ an album distributed by the UK’s World Music Network.

I fell in love with salsa music and salsa dancing in my early twenties when I lived in Austin, Texas. I spent just about every night of the week out dancing, and many subsequent heavy-lidded mornings in front of my computer at work. I wouldn’t trade it for anything, and consider the years I spent obsessively social dancing to be some of the healthiest and happiest years of my life thus far.

Classic salsa rhythms are derived from African, Latino, and Caribbean rhythms, melded with American jazz forms in the 60’s and 70’s. For me, these rhythms illicit some of the truest feelings of joy and elation; it is impossible to sit still. After moving to Southern West Virginia, I gave up my dancing habit… until lately. The resourceful folks at Carnegie Hall have sponsored several salsa events this year. Oscar Hernandez and the Spanish Harlem Orchestra at Carnegie Hall, Pedrito Martinez at The Spring, and salsa lessons with Ken Baldwin, a veteran salsa instructor, and recent transplant from L.A.

The band will play two sets with a DJ’d break in between. The event is sponsored by The Casasanta Foundation, and tickets are available two weeks in advance of the show for $15 each at casasantafoundation.org. Tickets are also available on the night of the show at $18/ ticket. For more information please email casasantafoundation@gmail.com, or call 304-645-1500. Might Lewisburg become West Virginia’s first salsa hotspot?

– Amy McIntire is a musician, waitress, and concert organizer in Lewisburg, WV.