After an evening with the amazing Campbell Brothers on stage at Carnegie Hall, I was ready to just leap right on up into heaven, singing their praises all the way. Prominently driven by the distinctive style of pedal steel guitarist Chuck Campbell, his searing lap steel soloist brother Darick, hard-driving gospel vocals, the amazing guitar work of brother Phil and his son Carlton on drums. Add the the mix a funky gospel bass and an incredible gospel vocalist named Denise Brown to lift us higher and higher, and there you have it. A spiritually moving and inspiring group.

Bringing to us a tradition which has only recently emerged from the House of God Keith Dominion Church, where it has been an fundamental part of worship and an important, though not well-known, American religious foundation, it moves seamlessly from concert hall to sanctuary, from living room to tent to festival to church. This rousing inspirational genre has found its place everywhere.

I had missed a workshop/lecture held that afternoon by the amazing ensemble. I heard it was amazing, and interactive, with a couple of our local musicians Don Steck (harmonica) and Don Drummer (pedal steel) joining the band for a bit of jamming. I arrived as it was ending, but did have a few moments to talk to Chuck about his tuning and his style. He is credited for bringing his tuning to jam-band Robert Randolph and the Family Band. He explained his odd tuning, as best he could to a non-steel player such as myself, but it seemed to have the best of both traditional steel tunings (C6 and E9) all rolled up into one amazing melodic idea. For more discussion and explanation, go to: steelguitarforum.com. Smart man, and charming, this Chuck Campbell… You can find more about the Brothers’ schedule, bio, history and more at their website: campbellbrothers.com<.

During the evening performance, they rocked and rollicked through the joyful “Don’t Let Nobody Turn You Around”, “Somethin’ Bout the Name of Jesus” (which was completely rocked by Denise Brown’s up-lifting, arm-waving, good-feeling powerhouse gospel vocals), and the completely kick-ass “I’m Goin’ Home on the Morning Train”. We were on that train right along with them, riding high on energy and elation, delight in what this band had to offer. On they went, through an unusual arrangement of “Amazing Grace”, the moving “I’ll Fly Away” and more.

At one point, while listening to the growling, wailing, keening, and howling of the steels, I almost felt they were speaking to me in some new tongue, I mean it. I thought to myself, the steels are speaking to me! I was a zealot, a devotee, a believer.

For the encore, they just tore it up with “Jump for Joy”, featuring a killer drum solo and the funkiest bass playing that stage had heard for a while. They turned loose the blazing electric guitar talents of brother Phil, a big man with a big message. The energy level was staggering. I felt lifted beyond earthly tethers, I felt my spirits rise. I had never heard anything quite like it, this Holiness-Pentecostal repertoire. Devotion. Inspiration. Righteously kicking some musical ass. Praise be. 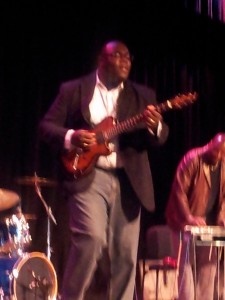 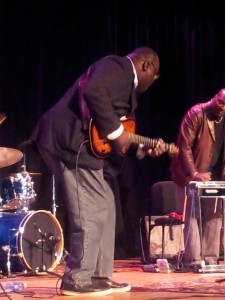