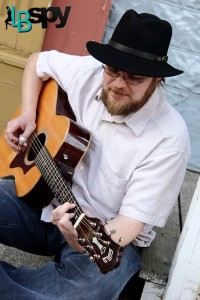 If anyone can tell you what a dobro, it’s Corey Lee McQuade. The dobro is an acoustic guitar that sounds more like banjos than guitars. Corey plays his dobro on his lap. Not only is Corey incredible at playing this well-known bluegrass instrument, he also play the guitar, banjo, and mandolin. He also sings, plays solo shows, and performs with several bands.

Since its birth in ‘05, Corey’s been with Johnson’s Crossroad. What started in Lewisburg is now a travelling band based out of Asheville, NC. While Corey stayed in Lewisburg, he continues to perform with Johnson’s Crossroad as often as he can. Corey also sits in on occasion with Brown Chicken Brown Cow String Band and The Wild Rumpus. Every now and then, he plays with The Possum Holler Glee Club. Corey also plays duo shows with Jonathan Sneed from Fayetteville.

For any of us who’ve stopped in the Sweet Shoppe on a Wednesday night in the last 7 years, we’ve most likely heard Corey performing on stage.

Corey’s solo showconsists of finger picking and flat picking guitar and claw hammer banjo. He plays folk, country blues, old time, and country music. Corey started playing in his early 20’s. He says that when he started playing open mic, he was still a walking work in progress and got a little better with time. Corey started hosting the Open Mic Night at The Hobnobbery in Lewisburg, now the Sweet Shoppe in downtown Lewisburg. Hosting open mic, Corey has seen it all from stand up comedians to cellists. Around 2005, he even saw the Half Bad Bluegrass Band practice at the Sweet Shoppe’s open mic for about a month. How did they sound? Well, you’ll have to ask Corey.

In the beginning of his musical career, Corey played mostly classic rock, a lot of Grateful Dead and Frank Zappa.

Corey believes that the Grateful Dead are a gateway from rock to country music. The moment that changed Corey’s music from rock to bluegrass was when he heard John Hartford’s “Aeroplane” album. He says this album changed him forever. Interestingly, Corey didn’t like bluegrass but this album was different to him. The biggest thing that stuck out to him was the dobro playing on it.

His biggest dobro influence is Tut Taylor. According to Corey, Tut is the only musician to flat pick the dobro instead of using a thumb pick and finger picks like a bluegrass banjo player. Every other dobro player uses fingerpicks. Everything Corey does on the dobro is based on Tut. He flat picks the dobro just like Tut does.

Corey Lee is so passionate about bluegrass that fellow band-member from The Possum Holler Glee Club, Jay Hayes, nicknamed him Blindfolded McQuade. Corey is always playing some old blues song by some old blind bluesman. Next time you’re out in town on a Wednesday night, check out the talented Corey Lee McQuade.