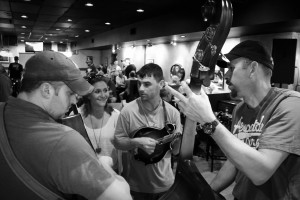 Founded in 2005, The Half Bad Bluegrass Band is becoming a household name for bluegrass loving fans, on the east coast. To expand their reach, they travel out of the area almost every weekend from Charlotte, NC to New York.
Band members include Heather Lively (lead vocals), Mike Estep (dog house bass and vocals), Wesley O’Dell (mandolin & vocals), and Brian Bell (lead and rhythm guitar). John Lively (banjo and vocals), is also the band’s booking agent. The band’s 2012 schedule is almost booked solid and 2013 shows are filling up fast. To book this band, call John at 304.646.4898.

This is a highly talented group of people who are passionate about music.

Almost every band member performs in instrument and vocals. Whether involved with another band at some time or performing solo, every member has about 10-15 years of musical experience. During their St. Patrick’s Day performance, their experience was demonstrated through confidence to entertain the audience, supported by solid sound.

For those of you who attended the show, you may have picked up Half Bad Bluegrass Band merchandise. The band sold t-shirts, beer koozies, stickers, and their latest cd: “Live: Rails, Rivers, and Rogues. Merchandise is sold at every show so you can take a piece of the Half Bad Bluegrass home with you to drink with, wear, or listen to.