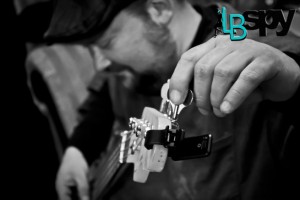 If your musical preference is classic metal, Zextrobe is your band. Within the past few years, Zextrobe has carved out a metal loving niche in Greenbrier County. They perform about 50/50 original music and cover songs and they always deliver to any thrash inspired crowd. As we sat through their practice session, in band member Casey Cantrell’s living room, they impressively covered songs, “Thunderkiss 65” – Rob Zombie, “Too Many Puppies” – Primus, “Children of the Grave,” – Black Sabbath, and “Mother” – Danzig. Breaking out Zextrobe originals, they performed their popular and hard-hitting ballads, “I See Death,” “42,” and “Kaylee.”

Zextrobe is not limited to Greenbrier County as they are making plans to perform in surrounding areas.

While the band has grown in popularity more recently, it origins started in ’91. Not long after its start, the band took a break for several years and re-formed in ’09. Since ’91, band members have gained their share of life experiences. Today, there are three original members, including Casey Cantrell (drummer), Yukon Knight (guitar), and Dave Samsock (guitar). In ’09, Cantrell, Knight, and Samsock reformed the band and added two talented musicians, Isaiah Manahan (guitar/vocals) and Jake Perkins (lead singer/bass).

Vocalist, Jake Perkins has added a unique touch to the band with his annual Piano Burning.

5 years ago, Perkins was a gifted a piano. Not having a place to store it, he put it in storage. Not long after, Perkins complained to friends about the monthly storage fee. He announced he would burn it on his birthday. The band came together to create an event called, “Jake’s Piano Burning.” Now in its 5th year, Jakes Piano Burning is expected to be bigger than ever. The event is free and held at Sam Black exit, off Highway 64. Zextrobe provides the lighter fluid and food. Fans are encouraged to bring tents and whatever relief needs.

Worth mentioning, Zextrobe’s merchandise line is expanding and ladies get ready…. On the March 17th, the band is introducing their brand new line of Zextrobe crested guitar pick jewelry, by Katrina Scott and Kari Burns. Scott and Burns have teamed up to create Zextrobe earrings and necklaces. Check out their booth at every show, where they’ll be selling the jewelry line and Zextrobe t-shirts.