We had the privilege of interviewing Vern’s Pot o’ Chili (VPOC) during a pre-show February rehearsal. As we approached the rehearsal, at Charlie’s house, we could hear the drums, horns, guitar, and vocal melodies flowing through the night air. We walked into the practice session hearing songs not yet publicized. The name of the first song was “Breathing Fire.” It’s a very danceable instrumental tune with a hard hitting chorus section, a rather abstract bridge and an undertone of the Beatles “Elenore Rigby.” The next song was “Contract Killer” and it had an upbeat ska like tune. Get ready for these two songs, as they will be in VPOC’s next album.

VPOC started as a trio, in 2001. While Ian Lutz and Neil Jones are VPOC’s original members, the band includes 7 more gifted musicians: Charlie Hatcher, Jason Johans, Dan Freeman, Brian Carr, Birch Graves, Patrick Driscoll, and Jim Allder. Instruments include the drums, guitar, base, vocals, harmonica, trumpets, saxophone, ukulele and the French horn. Of course, VPOC would be lost without their sound and lighting techs, Kenny Simmons and Bobby Lilly. Let’s take a look inside VPOC and learn more about them professionally.

For anyone searching for a guitar, they may think Alpha Music in Lewisburg. Charlie Hatcher, owner at Alpha Music, is the band’s bass player. He joined VPOC 2½ years ago. Dan Freeman (VPOC bass player since ’05) works with Hatcher at Alpha Music. For those of us who enjoy downtown Lewisburg nightlife, Ian Lutz is a habitually seen face. Lutz, who performs drums, guitar, and vocals, is also VPOC’s manager, press contact, and booking agent. Outside the band, Lutz owns a graphic/web/landscape design company called, Igloo Design Workshop. Whenever you see an eye-catching VPOC flyer, Ian Lutz made it. Jason Johans (guitarist/harmonica player since ’04) is not only talented musically, but he’s a huge contributor to the area’s special needs children. Johans is the Gifted Education teacher for all of Greenbrier County’s elementary schools. Neil Jones, who performs drums, rhythm guitar, and vocals, is a huge contributor to the band and the community at large. Professionally, Jones’ focus is teen dropout prevention. He works for Communities in Schools, a non-profit organization that counsels at risk youth. Jones is also VPOC’s primary songwriter. Several VPOC songs are the result of Jones’ songwriting combined with the structuring and composition of the rest of the ensemble. Freeman’s style of songwriting adds a laid back vibe to VPOC albums and live shows.

Now that you know more about the ingredients that make up Vern’s Pot o’ Chili, we think you should check them out live. 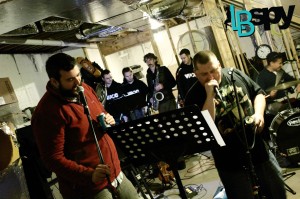